Teachers hear ‘cure for the Common Core,’ more at institute 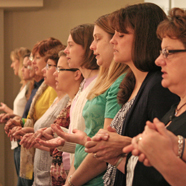 Photo Caption: Teachers from St. Mary School in Bloomington hold hands during the Lord’s Prayer at the opening Mass for the Diocesan Teachers’ Institute on Oct. 11.

Nearly 800 teachers, principals and friends of Catholic education received encouragement and enough food for thought to take them through the rest of the school year at the Diocesan Teachers’ Institute in Peoria on Oct. 11.

The day started with a Mass celebrated by Bishop Daniel R. Jenky, CSC, at St. Mary’s Cathedral. Acknowledging that they are on the front line of the battle between good and evil, he said he looked to them to be strong in passing on the faith to young believers around the Diocese of Peoria.

“It doesn’t matter if you teach chemistry or Mandarin Chinese,” Bishop Jenky said. “Every one of those moments is an opportunity for you to witness to the Lord. No matter how eloquent you are as a teacher, your witness will be even more powerful.”

After the liturgy the educators moved to the Peoria Civic Center for a presentation by Greg Dhuyvetter, superintendent of schools for the Diocese of Orange, Calif., who talked about “Ten Technology Trends That Will Change Education (and Life in General). (See the related story.)

They also heard from Sister Mary Angela Shaughnessy, SCN, dean of the graduate school and general legal counsel at St. Catharine College in Kentucky, who spoke about “Social Media and Technology: Legal Issues.”

The most controversial topic of the day — the widely-discussed Common Core State Standards — was addressed by Kathy Mears, a native of Bellflower who now serves as executive director of the National Catholic Educational Association’s Elementary Schools Department. Her presentation, which was filled with humor as well as practical tips, was titled “The Cure for the Common Core.”

IT’S NOT CURRICULUM
Mears wasted no time in reminding the teachers and administrators that the Common Core State Standards are not curriculum.

“Curriculum says what is taught, when it was taught, how it’s taught and how you’ll know when students have learned what you’ve taught,” she said. “None of those characteristics are met in Common Core. That’s probably the biggest thing out there, that Common Core is a curriculum and it’s totally false.”

Mears explained that the Common Core presents a set of standards that tell what students should know, understand or be able to do at the end of a grade level or course of study. They were developed by teachers, parents, school administrators and education experts working with state education officials and have been adopted by 45 states, including Illinois.

“Here’s the secret and it’s what I tell the people who call to complain about this. They say, ‘Who’s going to decide what the teacher’s going to use?’ and I say, ‘The teacher, just as the teacher is deciding right now,'” she said.

If the teachers or school administration doesn’t think the students need to know what’s recommended in the Common Core State Standards, they don’t have to teach it.

“I have faith. I know you people. You will make the right choices 99 percent of the time and when you don’t you’ll say, ‘I’m sorry,’ and we move on,” Mears said. “You know what your kids need. I have no doubt you’re going to make good choices on that.”

CURE READILY AVAILABLE
Math and English language arts were the first two areas for which standards were developed because those are the skills students need to grow in other subjects. There are standards for each grade, from kindergarten through high school.

Mears said that in math, for example, most eighth-graders need to take algebra under Common Core. That means looking at what comes before to make certain that this can happen.

It is important to “hit” these benchmarks because college entrance exams like the ACT are being aligned to these standards, she said.

In August, the superintendents of Catholic schools in the six dioceses of Illinois issued a statement to clarify that the Common Core State Standards are intended to be “an outcomes-based vehicle that seeks the best instructional methods for educating our children.”

“We will determine what to adapt from the Common Core standards according to what best fits our unique mission,” they wrote in the statement that was issued through the Catholic Conference of Illinois. “We will never allow the faith and the education of our children to be compromised.”

They also supported the work of the National Catholic Educational Association and the Common Core Catholic Identity Initiative to help Catholic schools and dioceses implement the Common Core standards while maintaining a Catholic identity.

Mears suggested the “Cure for the Common Core” is great teaching.

“Standards don’t matter unless we have teachers who take kids there,” she said. “I have before me 800 educators who care about their kids, who will work hard to make sure that their students learn not only about reading, writing and arithmetic, but about God, and because it’s in your hands we have the cure.”