St. John’s Catholic Newman Center at U of I: caring family 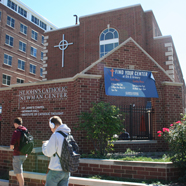 Photo Caption: Students are invited to “find your center” as they walk past St. John’s Catholic Newman Center at the University of Illinois in Urbana-Champaign.

EDITOR’S NOTE: This is the first in a monthly series profiling college campus ministry in the Diocese of Peoria.

“There’s good food, there’s friendship, the dining hall, a big study area — they feel at home,” said Sister Loretta DeDomenicis, FMA, a member of the pastoral staff. “Then they start to look around and see their peers leading a retreat. There is the young man who’s my friend playing basketball and he’s involved in pro-life. I think that’s the impact here.”

More than realizing they can live an authentic Catholic life and take on roles of responsibility in the community, students come to understand that this is a desire of their heart, Sister Loretta told The Catholic Post.

“They come alive. They love it, capture it and want to participate,” she said.

That doesn’t happen by accident, according to Msgr. Gregory Ketcham, chaplain and director at St. John’s since 2006.

“Jesus didn’t just go to the top of a mountain and shout out to hundreds of thousands of people to follow him. He began the movement we know now as Christianity by entering into 12 friendships,” Msgr. Ketcham explained. “I think that’s what’s most powerful about Newman ministry. We are bringing our young Catholics into genuine friendship with one another and therefore genuine friendship with the Lord.”

That pastoral approach includes bringing students together in small groups with the seven missionaries from the Fellowship of Catholic University Students (FOCUS) for Scripture reflection and exploring how God is interacting in their lives.

OUTREACH AND EVANGELIZATION
Sister Mary Ann Schaefer, FMA, who oversees the Service and Justice Outreach and the new Newman Shares food pantry at St. John’s, sees that give and take happening already.

“In a Newman Center where you have your faith in action with various ministries, the student who might have turned away from church gets involved in a ministry and then finds the reason for church — they’re spiritually fed for the ministry they’re doing,” she said.

“It’s the same with the sacraments. You’re either continuing to strengthen those who are really firm, staunch and this is what they really wanted to keep their faith or you’ve got the student who’s not a church-goer . . . but needs that community to keep himself alive in ministry and focus and give him the spiritual strength to go to his ministry,” she said.

That also happens through the Koinonia retreats that are held four times a year and involve 45 participants each time. At least 25 students who have already made the retreat serve as team members, along with a priest, Sister and FOCUS missionary who act as spiritual directors for the weekend.

“Once a student goes on Koinonia they become part of the community and once they’re in the community there’s no stopping them,” said Sister Loretta, who oversees the retreat program.

St. John’s reaches out in other ways, big and small. Msgr. Ketcham said they just had Mass on the Grass near the Six Pack — six freshman dorms on campus — in an ongoing effort for outreach and evangelization.

There are also eucharistic processions on campus, a Stump the Priest night on the Quad and a Distinguished Speaker series that has hosted talks by people like Brother Guy Consolmagno of the Vatican Observatory. On Oct. 28, St. John’s will welcome Father Vince Lampert, a Vatican-trained exorcist.

On a smaller scale, but no less appreciated, the Sisters hand out cookies every Tuesday night to the students as they study.

HALLMARK IS COMMUNITY
The first organization for Catholic students at the University of Illinois started in 1905 and funding for the first chaplain, Father John O’Brien, was secured by the Knights of Columbus in 1915. With financial assistance from the fraternal organization, a Newman Center complex was constructed in 1927 and included St. John’s Catholic Chapel and a 200-bed residence.

At the time, it was the third Newman Center built in the United States and the only one with a residence hall. That remained true for many years, but Msgr. Ketcham said there are now residence halls at Newman Centers in Texas, Florida and Alabama.

“If we had a Catholic dorm of 250 to 600 students on every campus in the country we’d have a transformed church in America because of the amount of formation you can give students who live under your roof,” he said.

Msgr. Edward Duncan succeeded Father O’Brien in 1943 and would remain for 54 years, putting the Newman Center on a firm financial footing and establishing a series of for-credit courses at the University of Illinois.
He was followed by Msgr. Stuart Swetland, who refurbished the residence hall and converted the building into a coed dorm, with male and female students in separate wings. He also helped to establish the Institute of Catholic Thought.

Ground was broken for an expansion in 2006 that added a new wing to the residence hall, increasing the capacity to 586 students. The complex was dedicated and blessed in September 2008.

This has enhanced the sense of community at St. John’s Catholic Newman Center and that’s the most important thing for Msgr. Ketcham.

Adoration: At the same as confessions.