Keeping students safe from bullying is goal at St. Mark’s 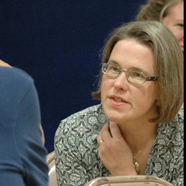 Name-calling. Teasing. Leaving someone out of a conversation or game. Shoving.

Mistreatment of others at school — including at Catholic schools — is not new. But some methods of doing so are.

“Cyber-bullying is growing exponentially,” said Bob Falle in addressing a group of parents recently at St. Mark School in Peoria. Cyber-bullying is using electronic technology (text messages, social media such as Facebook, emails, chat, etc.) to embarrass, spread rumors about, or intimidate others.

“When I was young, I knew who the bullies were and I stayed away from them,” said Falle, who is helping St. Mark’s pilot a new program called Safe School Ambassadors. “Now kids go home and they can be contacted 24 hours a day if they have a cell phone,” which most do.

St. Mark’s is the first parochial school in Illinois to implement Safe School Ambassadors, a program that trains student leaders to intervene when they see mistreatment of friends and other students. Forty-one students identified as socially influential “opinion leaders” received special training Oct. 1, while dozens of parents learned ways to address bullying and other forms of mistreatment the previous night in the school gym.

“Students can’t learn and achieve well in an environment where they are teased, left out, and sometimes mistreated,” said Dr. Noreen Dillon, principal of St. Mark’s. She told The Catholic Post that, as a Catholic school, St. Mark’s has the advantage of adding important faith elements such as virtue education, prayer, and the Commandments to the training offered nationally by the group Community Matters.

She called bullying “an important topic for our school and community to be dealing with.”

NOT “COOL TO BE CRUEL”
Falle, a senior trainer with Community Matters, said that bullying is “younger, meaner, and more accepted than ever.” And what is witnessed or reported is only the tip of the iceberg, he said.

“It’s easy to spot fights,” he told the St. Mark’s parents, but “what we don’t see is what lies below the surface” such as exclusions and put-downs that destroy self-esteem, increase tensions, and can even lead to illness, depression, and suicide.

Too often, Falle said, it’s considered “cool to be cruel.”

The newly trained student leaders are not a “safety patrol.” Though they received wristbands with the word “Courage” at the end of their training, they wear no self-identifying clothing. Their goal is to be better friends and the expectation is that they will notice, think, act, and follow-through when they see mistreatment.

“Students see, hear, and know what adults don’t,” said Falle. “They can intervene in ways adults can’t.” Ways they may intervene include distracting, balancing, reasoning, supporting, directing, and getting help — specialized skills they were taught in training.

Falle was impressed that about 40 parents attended the evening presentation — representing about 20 percent of the student population.

“We’re all here for the same reason,” he said. “We want our kids to come to school and feel welcomed and accepted in a peaceful environment.” He encouraged the parents to watch for warning signs that their children are either targets or aggressors, to keep communication lines open, and in this age of cyber-bullying “to look very closely at the type of social network sites your children are on.”