‘Saint of Auschwitz’ play is coming to 6 sites in diocese 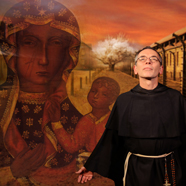 Six locations in the Diocese of Peoria this month will host “Maximilian: Saint of Auschwitz,” a 90-minute production performed live by Leonardo Defilippis.

Among the performances will be a vicariate-wide event planned Oct. 26 at St. Matthew Parish Center in Champaign. Other locations include Carthage, Galesburg, Canton, LaSalle and Moline.

The one-man play shares the story of St. Maximilian Kolbe, a Polish Conventual Franciscan friar whose courage in the face of attacks against his faith led to his imprisonment in the Auschwitz concentration camp during World War II. He was forced into slave labor, tortured, and finally came forward to take the place of a married man who was condemned to death by starvation.

The saint’s defense of religious and moral freedom makes Maximilian a “story for our times,” said Defilippis, a Shakespearean actor and founder of St. Luke Productions. The company seeks to evangelize the culture through live and filmed productions, including “Faustina: Messenger of Divine Mercy,” which is also currently touring the country.

“St. Maximilian Kolbe has a powerful yet cautionary message for all of us — to not take the freedoms we cherish for granted, but rather to defend them with our lives,” said Defilippis. He said the play is suitable for ages 10 and up. It utilizes an orchestral soundrack, theatrical lighting, and a video backdrop.

Following is the schedule of locations and times for “Maximilian” in the Diocese of Peoria. There is no charge to attend, but a free-will offering will be received at each performance.

For more information on the production, visit Saint Luke Productions.