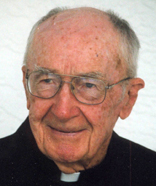 FORT MYERS BEACH, Fla. — A funeral Mass was celebrated at Ascension Church here on Oct. 14 for Father Richard E. Raney, 100, the priest with the most seniority in the Diocese of Peoria.

Father Raney, a former pastor of parishes in Ottawa, Chatsworth, Chillicothe, and Moline, died on Friday, Oct. 11, 2013 in Fort Myers Beach. He would have turned 101 on Oct. 19. He was in the 75th year of his priestly life and had served as chaplain for the Poor Clare Nuns at the Monastery of St. Clare in Fort Myers Beach since he was granted senior status in 1980.

Burial was in the Monastery of St. Clare.

Bishop Daniel R. Jenky, CSC, will celebrate a Memorial Mass at 9 a.m. on Tuesday, Oct. 29, at St. Mary’s Cathedral in Peoria. Priests from throughout the Diocese of Peoria who are taking part in Priests’ Assembly Days that day will concelebrate.

Born in Peoria on Oct. 19, 1912, to William and Loretta (O’Malley) Raney, he attended St. Bernard School and Spalding Institute. After studying philosophy at St. Bede Junior College in Peru, he completed his preparation for the priesthood at Kenrick Seminary in St. Louis.

He was ordained by Bishop Joseph H. Schlarman on June 5, 1938 at St. Mary’s Cathedral, Peoria.

Father Raney’s first assignment was to Holy Trinity Parish, Bloomington, where he served as parochial vicar, coach and athletic director. He was named pastor at St. Mary’s (Naplate) in Ottawa in 1946, and helped to establish the athletic department at Marquette High School.

In 1950, he became pastor of Sts. Peter and Paul Parish, Chatsworth, and seven years later began 18 years of service as pastor of St. Edward’s Parish in Chillicothe, where he would build a school, convent, rectory and new church.

His final assignment was as pastor (and later co-pastor) of Sacred Heart Parish in Moline. Father Raney was granted senior status in 1980.

Father Raney’s retirement to Fort Myers Beach, Fla., enabled him to be close to friends in the area and pursue his passion for golf. He would record a hole-in-one at age 92. Father Raney celebrated daily Mass for the Poor Clares.

In 2008, he returned to the Diocese of Peoria for celebrations of the 70th anniversary of his ordination hosted at St. Bernard Church, Peoria, and Sacred Heart, Moline. At the Peoria Mass, Bishop Jenky praised Father Raney for the knowledge and wisdom he brought to the parishes of the diocese throughout his priestly ministry, and Msgr. Paul Showalter, vicar general, said “your priesthood has been a blessing to us.”

Father Raney is survived by a niece, Mary Ann Muller of Peoria; two nephews, Bill (Rosemary) Muller of Forest Park and Steve (Mary Ellen) Raney of Milwaukee, Wis.; a great-niece and a great-nephew. He was preceded in death by his parents as well as siblings Robert and Gertrude.

Memorial donations may be made to the Poor Clare Nuns.