Dedication of St. Jude School is even better than dreamed 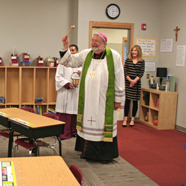 Photo Caption: Bishop Daniel R. Jenky, CSC, blesses a classroom of the new St. Jude School in Peoria following a Mass of Thanksgiving at the parish on Oct. 5. Winnie Pratt, principal, looks on.

As he looked around the gymnasium brimming with young families and longtime parishioners at the new St. Jude Catholic School in Peoria, Bishop Daniel R. Jenky, CSC, said sacrifice shows other people what we love.

“Today it has shown me your love for the faith and the education and formation of young people,” he said. “I am so happy to see this brought to completion.”

He got an opportunity to see every part of the school as Winnie Pratt, principal, led him through the building. Not only did he leave holy water in his wake, but admiration for the bright new learning spaces.

The newest school in the Diocese of Peoria, St. Jude opened in existing space in the parish education wing in 2009. This fall, students in first through sixth grades are attending classes in a new 26,000-square-foot building that includes a science lab, administrative offices, and a kitchen and lunchroom that can double as a stage, in addition to the gym and locker rooms.

Bill Kraft, who chaired the “Building God’s Kingdom” Capital Campaign with his wife, Carolyn, said that it was thought parishioners could raise between $1.2 and $1.8 million when the campaign began in 2011. They raised $4.1 million.

“The generosity of the people of St. Jude is overwhelming,” he told The Catholic Post.

“One of the things that was said and we wanted to do was build a school as one more mission of the parish,” he explained. “We felt that with the addition of the school, with the way (Peoria) was growing on the north end here, that it would only enhance parish growth, which it has done. Not only do we have 189 children in our school now, we have 380 children in CCD. We’re well over 1,000 families now.”

“This is so exciting,” Carolyn Kraft said. “If we could have known eight-and-a-half years ago that this would come and we would see it, we would have been much more comfortable at the time. This is what we wanted so much.”

In fact, it’s more than they hoped for, she said. “Seeing the enthusiasm of the people makes it even better.”

MAKING LIFELONG STUDENTS
At the Mass that preceded the blessing, Father Patrick Henehan, pastor, reminded his parishioners that the project was about souls.

“This project is designed to teach, to form, to serve and to lead souls — to lead them closer to each other and to Christ,” he said. “This is already happening because of you. Know that your efforts and your generosity will affect people for many generations, even when we’re all gone.”

In his homily, Bishop Jenky promised the students of St. Jude School that they would learn many important things, make new friends, and participate in sports and other activities.

“But an excellent Catholic school is also an enormous opportunity to deepen your faith in God and to experience God,” he said.

“In St. Jude Parish and in its Catholic school, in all its families, in everything you do together as a family of faith, may the lessons of faith be boldly proclaimed, year after year, week after week, day after day,” Bishop Jenky said. “Then may all of us be lifelong students, lifelong disciples in the school of the Lord.”

A picnic was to follow the Mass and blessing of the school, and parishioners didn’t let the threat of thunderstorms deter them. They gathered in the new gym for a potluck dinner, games and live music. Joining them were Bishop Jenky and Father Tony Lee, former pastor of St. Jude who now serves as pastor of Holy Trinity and Historic St. Patrick Parish in Bloomington and chaplain at the John Paul II Catholic Newman Center at Illinois State University.

Also taking part in the festivities were the four Dominican Sisters of Mary, Mother of the Eucharist who came to Peoria in August to teach at St. Jude and Peoria Notre Dame High School. In addition to bringing up the offertory gifts at Mass, they sang a Communion meditation.