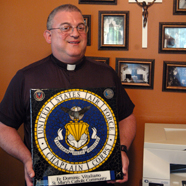 Photo Caption: Father Dominic Vitaliano displays a mosaic given to him by friends when he left Mountain Home Air Force Base in Idaho in July. It was his final assignment in a 12-year career as an Air Force chaplain.

BUSHNELL — As an Air Force chaplain for the last 12 years, Father Dominic Vitaliano has brought the healing and hope of Christ to some of the most extraordinary situations in our generation.

Six months later, as the nation prepared for war in Iraq, he was in the neighboring Middle East country of Qatar at Al-Udeid Air Base, which in a two-week period swelled from 1,700 personnel to 9,000 and housed the largest concentration of fighter aircraft in history.

After an earthquake in the Indian Ocean on the day after Christmas in 2004 triggered the most deadly tsunami in history, killing more than 227,000 people, Father Vitaliano was deployed to Thailand to minister to the military taking part in the humanitarian effort.

And as Holy Week neared in 2009, he was traveling in a military convoy in Afghanistan when an improvised explosive device went off along the dirt road. Father Vitaliano wasn’t injured, but “I couldn’t see anything out our windows. It was completely dark because of the dirt,” leaving him and the five soldiers with him in the vehicle fearful of an imminent follow-up attack which thankfully never came.

“It’s amazing what I’ve been through,” said Father Vitaliano, seated Sept. 3 in the rectory of St. Bernard Parish in Bushnell. After surgeries in each of the last two years, he received a medical discharge from the U.S. Air Force on July 28 and is back in the Diocese of Peoria, grateful for the opportunities of the past and “overjoyed” to serve the people of central Illinois once more.

His transition back to diocesan priestly duties begins with a one-year assignment as administrator of the Bushnell parish and neighboring St. Augustine Parish in St. Augustine, as well as sacramental duties at St. Francis of Assisi Newman Center on the campus of Western Illinois University in Macomb. Father Vitaliano is administering those ministries while Father Tom Holloway is on sabbatical.

‘THINK CAREFULLY’ ABOUT SYRIA
Like the rest of the nation, but perhaps with more familiarity than most, Father Vitaliano is keeping an eye on developments in the Syria crisis.
He said it is important to understand that the military doesn’t make policy, they follow orders.

“They make sacrifices and put their lives on the line,” he told The Catholic Post.

While cautious about commenting as the possibility of air strikes were being considered, Father Vitaliano did urge prudence.

“I think we need to think carefully about a strategy if we make commitments to do things when we enter into armed conflict,” said Father Vitaliano, who had four years of experience in the Air Force prior to beginning his studies for the priesthood. “What’s the purpose? What are we trying to achieve? Is it feasible?”

It could be said that similar life advice given to him by an Air Force chaplain during that period set Father Vitaliano on his priestly vocation path.

Born in New Jersey and raised near Miami, Fla., Father Vitaliano had wandered from his Catholic faith when the chaplain convinced him to return to Mass. He made a Cursillo retreat in Okinawa, and got involved with music ministry and a young adult group. While on another retreat, the chaplain gave Dominic Vitaliano the advice that would change his life.

“He said ‘You need to live your life as if you’re writing something on your gravestone,'” recalled Father Vitaliano. “And if you don’t want it written there the way you’re living, you have to change it today, not tomorrow.”

He gave Father Vitaliano that advice on a Saturday. Two days later, the chaplain died of a heart attack in his office at Kadena Air Base in Okinawa. Two decades later, Father Vitaliano would be stationed at the same base as a Catholic chaplain.

GREAT NEED FOR CHAPLAINS
After exploring a call to the priesthood with religious communities as well as dioceses, he chose to study for the Diocese of Peoria after meeting seminarians from here while at Holy Apostles Seminary in Cromwell, Conn. Father Vitaliano was ordained a priest by Bishop John J. Myers on May 25, 1991.

He served as parochial vicar at St. Mary, Pontiac, and later at St. Pius X, Rock Island. In the late 1990s he was pastor of parishes in Penfield, Philo, and Eureka.

Aware of the great need for chaplains in the military — in 1980 there were 250 Catholic chaplains in the U.S. Air Force, today there are 55 — Father Vitaliano petitioned Bishop Myers to be allowed to return to the Air Force. He was granted that request in the year 2000 and entered officer training school in Alabama.

His duties over the next dozen years as an Air Force chaplain and captain ranged from the intimately personal to the necessary practical as he traveled around the world. He received training in suicide intervention. “There is a suicide every day in the military,” said Father Vitaliano. “I’ve had airmen blow their heads off with an AK-47, with pistols, putting a bag over their head. It’s a terrible thing.” Dramatic cuts have left the military short on support and high on stress. Family life is especially challenged, he said.

When needed, Father Vitaliano would help at bases with such practical tasks as moving beds or driving shuttles. He attended countless briefings. But mostly he provided the sacraments and spiritual sustenance for military members and their families, whether in large settings such as in Abu Dhabi, United Arab Emirates, which had only one Catholic church that had 19 Masses on a weekend, or on remote forward operating bases in Afghanistan, where he once offered a Mass at six different locations in one day, traveling by helicopter and being allowed “40 minutes at each place.”

For the next year, the pace will be a little different as he travels the rural roads between Bushnell, St. Augustine, and Macomb.

“I am so happy and grateful to Bishop Jenky, and to Bishop Myers, for allowing me to be in the military and serve the many Catholics and non-Catholics through the great ministry I had there. I touched so many lives,” he said. “But I’m just overjoyed to come back to the diocese and function as a priest. We have really good people here.”