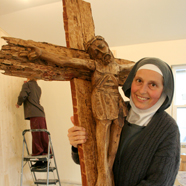 Photo Caption: One year ago, the Apostolic Sisters of St. John, including Sister Marie (pictured), established their first U.S. novitiate house in rural Princeville. They hope to build a larger convent and chapel.

PRINCEVILLE — Good news often brings challenges with it. That is certainly true for the Apostolic Sisters of St. John, who established their first American house of formation here last September.

The good news is that only a few days after arriving in rural Princeville, Sister Anne of Jesus, Sister Marie and Sister Karine were joined by three postulants and more are “knocking on the door.”

The challenge is that the little A-frame house near the Brothers of St. John and the Contemplative Sisters of St. John can’t accommodate anyone else. While the postulants would normally remain for another two years of formation, they have been sent to the motherhouse in France for their novitiate.

To meet the needs of their rapidly growing religious community, the Sisters of St. John are hoping to build a larger convent and chapel. Friends and supporters who would like to make that a reality can help by attending a benefit dinner on Saturday, Oct. 26, at 6 p.m. at the Spalding Pastoral Center in Peoria.

In addition to the dinner there will be a silent auction and raffle. Entertainment will be provided by Simonetta and FourEver, who will perform music from their new album, “Ineffable.”

GIVING AND RECEIVING
While it seems that they are doing the receiving, Sister Marie wants people to know that the Sisters have much they want to give back.

“Our energy is for evangelization,” she told The Catholic Post. “Any encounter is an occasion to share the treasure of the Gospel. We are grateful for anything people give us, but we would like to give them the best.”

In addition to preparing women for consecrated life, the Apostolic Sisters of St. John have joined the Brothers of St. John in welcoming and teaching young people who come for retreats and spiritual enrichment over the last year. They also took part in the Community of St. John’s annual summer conference.

Among the apostolates they have initiated since arriving in central Illinois are the Handmaiden Retreat for girls ages 9 to 13, a summer camp for girls that included a Marian procession, and monthly Bible studies for women.

A new convent will help them expand these apostolates, as well as accommodate more women in formation, according to Sister Anne of Jesus, the superior of the local community.

The goal is to have a convent that can house 10 to 15 women, she said. Plans also call for a larger chapel, a refectory and kitchen that can be used not only for meals but Bible studies and other programs, a library befitting a house of formation and prayer, a classroom and a workshop.

The estimated cost of construction is between $1.7 and $2.1 million. Sister Marie said they were trying to design something that is “not too ambitious but can still fit the number of Sisters we expect there to be on a regular basis.”

She said the Sisters are happy to come and speak at dinner gatherings in homes, to Altar and Rosary Society and Women’s Guild meetings, and Knights of Columbus events. Other activities to raise money for the convent are being planned.

A Roman Catholic religious institute with a monastic spirit and an apostolic mission, the Apostolic Sisters of St. John were founded in France in 1984. They now minister in 10 countries and established their first priory in the United States in 2007 in East Orange, N.J.