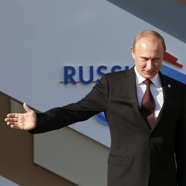 Photo Caption: In a letter to the Russian president, the pope wrote that, “from the very beginning of the conflict in Syria, one-sided interests have prevailed and in fact hindered the search for a solution . . . “

VATICAN CITY (CNS) — Pope Francis asked leaders of the world’s 20 largest economies to “lay aside the futile pursuit of a military solution” to the Syrian civil war and promote instead a “peaceful solution through dialogue and negotiation.”

The pope’s words appeared in a letter to Russian President Vladimir Putin, host of the G-20 summit in St. Petersburg, Russia, Sept. 5-6. The letter was dated Sept. 4 and released by the Vatican the following day, as U.S. lawmakers prepared to vote on President Barack Obama’s proposal for a military attack on Syria.

Also Sept. 5, the pope’s foreign minister met with ambassadors to underscore the Vatican’s concerns over the war, including the fate of Syria’s Christian minority and the danger posed by extremists among opponents to the government of President Bashar Assad.

Over the past two-and-a-half years, a civil war between Assad’s government and rebel forces has killed more than 100,000 people, driven 2 million refugees out of Syria and displaced more than 4 million inside the country.

Obama has called for military strikes to punish the government, which the U.S. blames for an Aug. 21 chemical weapons attack near Damascus that reportedly killed more than 1,400 people, including children.

USCCB weighs in on Syria with letters to Obama, Congress

In his letter to Putin, Pope Francis wrote that, “from the very beginning of the conflict in Syria, one-sided interests have prevailed and, in fact, hindered the search for a solution that would have avoided the senseless massacre now unfolding.”

Putin is Assad’s major foreign backer, but Vatican officials stressed that the pope’s letter was addressed to the Russian president in his role as host of the G-20 summit, which is dedicated primarily to financial and economic issues.

“Without peace, there can be no form of economic development,” the pope wrote. “Violence never begets peace, the necessary condition for development.”

Archbishop Dominique Mamberti, the Vatican’s secretary for relations with states, made a similar appeal for dialogue and negotiation in his remarks to more than 70 ambassadors accredited to the Holy See.

The archbishop said any resolution of the Syrian conflict must not divide the country into ethnic or religious enclaves or infringe on its “territorial integrity” — presumably a warning against redrawing national borders.

Archbishop Mamberti also called for defending Syria’s “minorities, including the Christians,” and their right to “profess publicly their own religion and contribute to the common good” in the Muslim-majority country.

Christian leaders inside Syria have frequently expressed fears over their fate in case Assad’s government should fall.

“A reason for particular worry is the growing presence in Syria of extremist groups, often coming from other countries,” Archbishop Mamberti said. “Hence the importance of exhorting the population and also the opposition groups to keep their distance from such extremists and openly and clearly oppose terrorism.”

Also on Sept. 5, the Vatican released more details about a prayer vigil for peace that Pope Francis will lead Sept. 7 in St. Peter’s Square.

Among the readings will be prayers for peace composed by several previous popes, and among the participants will be five couples representing Syria, Egypt, the Holy Land, the U.S., and Russia.