USCCB weighs in on Syria with letters to Obama, Congress 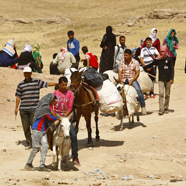 Photo Caption: Syrian refugees, fleeing the violence in their country, cross the border into the Kurdish region of northern Iraq Sept. 4.

“We have heard the urgent calls of the successor of St. Peter, Pope Francis, and our suffering brother bishops of the venerable and ancient Christian communities of the Middle East. As one, they beg the international community not to resort to military intervention in Syria,” said Cardinal Timothy M. Dolan, president of the U.S. Conference of Catholic Bishops, and Bishop Richard E. Pates, chairman of the Committee on International Justice and Peace in a letter released by the U.S. Conference of Catholic Bishops Sept. 4.

The letter affirmed the bishops’ prayers for the administration and acknowledged that “that the situation in Syria is complex,” and said they “appreciate the patience and restraint that your Administration has exercised to date.”

Cardinal Dolan of New York and Bishop Pates of Des Moines, Iowa, affirmed Obama’s decision to invite public dialogue and congressional review of possible military action, saying they wanted to contribute to that discussion in their capacity as pastors and teachers.

“We join you in your absolute condemnation of the use of chemical weapons in Syria,” they said. “These indiscriminate weapons have no place in the arsenals of the family of nations. With you we mourn for the lives lost and grieve with the families of the deceased.”

The clerics said they remain concerned for the more than 100,000 Syrians who have died and the 6 million who remain refugees or are displaced within their country.

However, they said, both the pope and the Syrian Catholic bishops have made clear “that a military attack will be counterproductive, will exacerbate an already deadly situation and will have unintended negative consequences.”

They concluded by noting that the long-standing position of the USCCB is that Syria needs a political solution.

“We ask the United States to work urgently and tirelessly with other governments to obtain a cease-fire, initiate serious negotiations, provide impartial humanitarian assistance, and encourage efforts to build an inclusive society in Syria that protects the rights of all its citizens, including Christians and other minorities.”

Cardinal Dolan and Bishop Pates sent a similar letter to each member of the House of Representatives and the Senate Sept. 5.