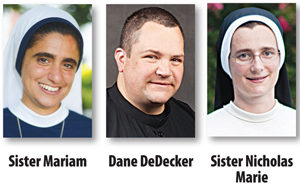 PEORIA NATIVE PROFESSES PERPETUAL
VOWS WITH THE SISTERS OF LIFE

Sister Mariam Caritas, 36, professed perpetual vows with the Sisters of Life during a Mass on Aug. 6 at the Basilica of St. John the Evangelist in Stamford, Conn. She entered the community in 2005 and professed her first vows on Aug. 15, 2008.

The former Beth McMurray is the daughter of Betty and the late Edward McMurray of Peoria. She was a member of St. Philomena Parish in Peoria and attended Peoria Notre Dame High School before going on to earn bachelor’s and master’s degrees in history from Illinois State University.

Before going to the Sisters of Life, Sister Mariam Caritas was involved in campus ministry at St. Joseph Newman Center at Bradley University in Peoria and helped to establish Catholic campus ministry through the Salve Regina Newman Foundation at Eureka College. She also assisted with liturgies at St. Mary’s Cathedral in Peoria.

Sister Mariam Caritas has served as assistant to the vocation director of the Sisters of Life and in their Visitation Mission, offering spiritual, emotional and material support to pregnant women in crisis so they could choose life for themselves and their children. Next year she will minister as assistant to the director of novices for her community.

Clothed in the Benedictine habit at Saint Meinrad Archabbey on Aug. 5, Dane DeDecker has begun a year of monastic formation as a novice with the Indiana religious community. In addition to studying the Rule of St. Benedict and monastic history, he will spend time in prayer as he discerns his vocation as a monk.

A native of Geneseo, DeDecker attended Geneseo High School and studied for a year at St. Mary’s University of Minnesota in Winona. He was a member of St. Anthony Parish in Atkinson.

For the past 12 years he has been an over-the-road truck driver.

Sister Nicholas Marie Polkowska, OP, who was involved in St. John’s Catholic Newman Center in Champaign while she earned advanced degrees in mathematics at the University of Illinois, was among 11 women who recently professed perpetual vows with the Dominican Sisters of St. Cecilia in Nashville. She is currently ministering in Elgin, Scotland.

The Sisters of St. Cecilia are dedicated to the apostolate of Catholic education. The community has 280 members serving in 33 schools throughout the United States and a house of studies in Washington, D.C., as well as mission houses in Sydney, Australia; Vancouver, British Columbia; and Aberdeen, Scotland.