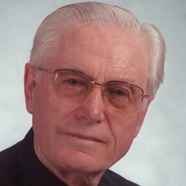 Photo Caption: Father Charles McCarthy, CSSp, pastor of parishes in Leonore and Eagle Township for 25 years, will move to senior status on Sept. 4.

Father Charles McCarthy, CSSp, 89, a native of Ireland who has served in the Diocese of Peoria for nearly four decades — including the last 25 years as pastor of Sts. Peter and Paul, Leonore, and Annunciation of the Blessed Virgin Mary in Eagle Township — will move to senior status on Sept. 4.

In a series of clergy appointments announced this week by Bishop Daniel R. Jenky, CSC, Father McCarthy will be succeeded in Leonore and Eagle by Father Gary Blake, who will continue as pastor of Holy Family Parish in Oglesby. Father Jeff Small will return from leave of absence to assist as parochial vicar at the three faith communities.

Father McCarthy is in his 62nd year as a priest of the Congregation of the Holy Spirit, with which he has been affiliated since he was accepted into the order’s juniorate in Cashel, County Tipperary, at age 12.

Following ordination on July 15, 1951, Father McCarthy taught English, literature, religion and art at St. Esprit College on the island of Mauritius in the Indian Ocean from 1952 to 1959. He then spent “15 marvelous years” in Nairobi, Kenya, teaching and running a boarding and day school. After a few years studying and teaching in Ireland, he then requested permission from his superiors to come to the United States for parish work.

In 1974, he was welcomed into the Diocese of Peoria, where Father McCarthy first served as parochial vicar at St. Joseph, Pekin; Sacred Heart, Rock Island; and St. Patrick and St. Mary parishes in Lincoln. Following eight years as administrator of St. Mary, Loretto, and Sacred Heart, Campus, he was named pastor of Sts. Peter and Paul, Leonore, and Annunciation, Eagle Township, in 1988, and has guided those faith communities since.

In a 2001 interview with The Catholic Post on the occasion of his golden jubilee of ordination, Father McCarthy said he wanted to be a priest since childhood and recalled “a very busy and eventful career.”

“There were lots of ups and downs in each of my assignments, but in spite of everything I have persevered with the help of my patrons: the Holy Spirit and my Blessed Mother.”

In Tolono and Ivesdale, he succeeds Father John Cyr, who has been named parochial vicar of St. Vincent de Paul in Peoria, where he served in 2005.

Father Donald Henderson, who was parochial vicar at St. Vincent de Paul, Peoria for two years, will become pastor of St. Mary, Princeville. Father Henderson, ordained in 1970, has served as pastor of parishes in Peoria, Danville, Earlville, Streator, Delavan, Hopedale, Spring Valley, El Paso, and Minonk and on the faculties of Schlarman High School in Danville and Peoria Notre Dame.