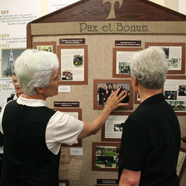 A traditional Franciscan salutation, it means “peace and all good” and that’s what men and women from nearly 20 Franciscan communities have brought to central Illinois. Their many contributions are highlighted in an exhibit that will run through Dec. 15 in the Diocesan Museum, which is located on the ground floor of the Spalding Pastoral Center in Peoria.

“I think the museum exhibit is a natural extension of the love we have for the Franciscans. They’ve been in the fabric of our diocese since before we were a diocese and they still are,” said Msgr. Stanley Deptula, executive director of the Archbishop Fulton J. Sheen Foundation. He works with Sister Lea Stefancova, FSJB, and Sister Ann Gill, FSJB, diocesan archivists, to plan exhibits for the Diocesan Museum and the Archbishop Fulton J. Sheen Museum.

— first class relics of St. Francis of Assisi and St. Clare, which are on loan to the museum from the St. Thomas More Chapel at St. Mary’s Cathedral in Peoria;

— information about cathedral windows featuring Franciscans like Father Gabriel de la Ribourde, who was killed near Seneca in 1680;

— habits of the Conventual Franciscans, who staff Holy Family Parish in Peoria, St. Mary in Wenona, St. John in Lostant, St. Patrick in Minonk and St. Ann in Toluca; and the Order of Friars Minor, who staff Sacred Heart and St. Joseph in Peoria and St. Mary in Bloomington, as well as the plain brown burial shroud of the Secular Franciscans;

— a statue of the Blessed Mother presenting a rosary with the Franciscan Crown to St. Francis of Assisi, which was loaned to the museum by the Sisters of St. Francis of the Immaculate Conception (also known as the Heading Avenue Franciscans) of West Peoria;

— a large timeline with photos that traces the history of The Sisters of the Third Order of St. Francis from their German roots to America’s heartland to staff an orphanage in Metamora. They would go on to build hospitals and make it their mission to “nurse the sick with the greatest care and love”; and

— the Nativity scene from Sacred Heart Church in Peoria, which includes figures of St. Clare and St. Francis holding the Christ Child. It is said that St. Francis started the tradition of having a Nativity scene at Christmas, complete with animals, but built an altar over the manger filled with hay and straw so that Jesus actually would be present in the form of bread and wine.

“I think the Franciscan missionary spirit really comes from St. Francis’ deep conviction in the incarnation, because St. Francis really rejoiced that God became man,” Msgr. Deptula said, explaining that this is why the little poverello from Assisi could see God in all of creation.

“We can see that spirit in the brothers and sisters of St. Francis to bring God to the corners of the earth — to little country churches, to beautiful big city churches, to ministry to the poor, to education of youth, to the care of orphans,” Msgr. Deptula said. “That charism, I think, really comes from that core Franciscan belief in the humanity of God in Jesus Christ.”

What they do keeps changing because the needs do, said Sister Paula Vasquez, president of the Heading Avenue Franciscans. She was among a small group of Sisters from her community who toured the exhibit on Aug. 22.

She noted the many ministries depicted in the exhibit, including her own community’s work to develop and implement the Aledo Plan. The program was responsible for distributing religious education worksheets and materials to 85,000 subscribers in the United States and beyond for many years as the result of a concern about the instruction of children in the rural areas around Aledo who could not get to school.

“It’s responding to the needs of the times. What do the people need today? If we are able, we try to do it,” Sister Paula said, adding that the constant is the way the Heading Avenue Franciscans and all religious communities represented in the exhibit bring God’s compassionate presence to whatever they do.

“That’s the goal. We want to respond, but with a very definite reason,” she said. “There is a loving God that we will bring to them. He’s responding. We’re his instruments.”

Those who would like to discover how these instruments of God have ministered and continue to minister in central Illinois with a spirit of simplicity, joy and hospitality may visit the Diocesan Museum Monday through Friday, from 9 a.m. to 4 p.m. Groups are welcome and receive a special gift from Bishop Daniel R. Jenky, CSC.

TIE BETWEEN SHEEN AND FRANCISCANS?

The Diocesan Museum and Archbishop Fulton J. Sheen Museum are housed together in the Spalding Pastoral Center in Peoria and all exhibits in Diocesan Museum have a connection to the venerable media evangelist.

What does Fulton Sheen have to do with the Franciscans?

In this case, the connection comes through the Franciscan Sisters of John the Baptist of Peoria Heights.

“We took the idea of his daily Holy Hour,” said Sister Lea Stefancova, one of the diocesan archivists and a member of the community. “We have one hour of prayer every day for the priests and seminarians.”

“We actually have the only stained glass window of Fulton Sheen, that we know of, in our chapel,” added postulant Emily Barth, who works with Sister Lea and Sister Ann Gill, FSJB, in the archives.

“It’s kind of special for us, that we are associated with Sheen,” Sister Lea told The Catholic Post.