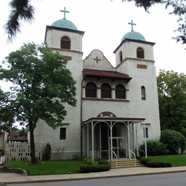 Photo Caption: St. Paul Church in Danville, dedicated in 1913, was built in the style of the Spanish mission churches of the Southwest. Bishop Jenky will celebrate a centennial Mass at 10:30 a.m. on Sunday, Sept. 8.

DANVILLE — A century of worship in one of the Diocese of Peoria’s most readily identifiable churches will be celebrated on Sunday, Sept. 8, when Bishop Daniel R. Jenky, CSC, joins the faith community of St. Paul, Danville, for a 10:30 a.m. Mass.

St. Paul Church, built in the style of the old Spanish mission churches of the southwestern part of the United States, was dedicated to serve a new parish on Danville’s north side on May 7, 1913.

Next Sunday’s celebration, which continues with a 1 p.m. dinner and program at the Beef House in Covington, Ind., will recall both the centennial of the church and give thanks for the blessings of more than a century of parish life.

“When our people talk about the church, they talk about how beautiful it is,” said Father Gregory Nelson, pastor of St. Paul Parish for eight years. “A lot of the original beauty has been preserved,” he told The Catholic Post, “and that’s a great testament to the love the parishioners have for this church.”

That love was especially evident a few years ago when, as the parish prepared to observe the centennial of its founding in 1910, it embarked on a major redecoration of the church. Parish members themselves took the lead in making the church interior brighter, warmer, and more inviting while respecting and even enhancing the unique architectural style.

The two-year project drew heavily on the vision and craftsmanship of parishioners Jim and Pat Sheehan, according to Father Nelson. In addition to improving sound and lighting and a creating a new design for the sanctuary back wall, the redecoration introduced a feature as unique to this diocese as the church’s architecture — John Paul II-inspired Stations of the Cross, featuring Scripture verses on a series of bronze plaques. A 14-foot crucifix donated by a former parishioner has become a beloved visual focal point.

CELEBRATION DETAILS
Joining Bishop Jenky and Father Nelson at the centennial Mass will be former pastors of St. Paul Parish as well as priests of the region. Music will be provided by a choir combining pastoral musicians and vocalists from the parish’s regular 8:30 and 10:30 a.m. Sunday Masses, as well as student singers.

The closing hymn will be “Praise the Lord,” from the Filipino Catholic tradition, acknowledging the number of parishioners of that ethnic heritage.

At the dinner — provided by the parish but reservations were required — attendees will view contents of a time capsule buried when St. Paul celebrated its 75th anniversary in 1988. The capsule was unearthed Aug. 17, and plans for a new capsule with materials from 2013 are being considered.

A student choir will set a 1913 mood by singing songs of the era including “You Made Me Love You,” “That International Rag,” and “Peg o’My Heart.” Father Nelson will also speak during the program, and unveil a new framed photo showing all pastors from the parish’s first 100 years. The image will have a place in the church vestibule.

“St. Paul’s is best known for its great generosity in fostering and supporting Catholic education, a spirit of volunteerism, and for helping those in need, especially through ministries such as our food pantry,” said Father Nelson. In addition to encouraging a sense of responsibility for the welfare of others, St. Paul also seeks to foster a spirit of cooperation among other parishes of the Danville vicariate.

“This way we can share some of the best ministries our parishes have to offer as well as benefit from the many talents that have helped make our area a unique and vibrant expression of the faith,” Father Nelson told the Catholic Post.

NINE PASTORS IN 100 YEARS
A parish history compiled for the centennial of St. Paul’s founding notes that the church was designed in the mission style by architect Charles Lewis at the request of Father Francis O’Reilly. St. Paul’s was the third Catholic parish in the city at the time, and was formed as an outmission of St. Patrick Parish, where Father O’Reilly served as pastor.

Built for $18,000, St. Paul Church was dedicated on May 7, 1913, in ceremonies that included a sermon by Father James McMahon of New York City. In attendance was Joseph Cannon of Danville, just back from an eight-year stint as Speaker of the U.S. House of Representatives.

There were only 15 families at St. Paul Parish in 1913. One hundred years later, the faith community embraces 750 households.

The parish has had only nine resident pastors in its first 103 years. The first was Father Timothy Monohan, who served from 1915 until 1939. Msgr. W. J. Drummy guided St. Paul for the next seven years, and was succeeded by Father Charles B. Motsett, who is recalled for his “boundless spirit of loving commitment” during his 26 years as pastor. The parish hall bears his name. It was during Father Motsett’s tenure that both St. Paul Elementary School and Schlarman High School were established. Both are now part of Schlarman Academy, with the former parish school hosting grades pre-K to 6.