Tour stirs high school memories of the Academy of Our Lady 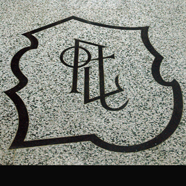 Photo Caption: “The AOL insignia took on a life of its own, as we were not allowed to walk on it,” recalled freelance writer Sandra Dempsey Post, a member of the Academy of Our Lady Class of 1966.

EDITOR’S NOTE: The author is a freelance writer who is a member of St. Anthony Parish in Bartonville. As the Peoria area prepares to conclude its celebration of 150 years of Catholic education (see related story here), she writes a first-person account of recently walking through the former Academy of Our Lady school building near downtown Peoria.

Nostalgia aside, stories abound concerning Catholic schools, particularly those from the ’50s and ’60s. Some are humorous, others very touching, some hilariously funny, and all definitely filled with sentimentality.

Education today, even in Catholic schools, doesn’t share the uniqueness and simplicity that created such engaging memories. Some find the retelling somewhat irreverent, particularly folks not educated by nuns and priests. But if you are a product of Catholic schools, it’s difficult not savoring the fond and funny.

I’m a full-fledged Catholic school graduate, but revisiting my educational roots in Peoria is difficult. In the ’50s, I went to Sacred Heart for kindergarten, first and second grades, but the building was demolished years ago. Third through eighth grade, graduating in 1962, was at St. Cecilia’s, but those buildings were remodeled for a senior living facility. High school was at the Academy of Our Lady (AOL), class of 1966, and that building now belongs to Children’s Home Association of Illinois.

An open house to introduce the community to the Children’s Home Academy for Autism was set for May 1, and the invitation stirred my interest. A call to a fellow graduate cemented plans to attend.

TRADITION AND PROGRESSIVENESS
High school was neither a delight nor a disaster for me. I had an aversion to algebra and geometry, but loved English and religion, so it balanced somewhat. The “in group” didn’t include me, but I had great friends and we shared many good times and still keep in touch.

The nuns at AOL — Sisters of St. Joseph of Carondolet, who also taught at St. Cecilia’s — were intriguing, interesting, and I was a bit in awe of the mystery surrounding them. They still wore full habits, and their mere presence in a classroom could command silence and compliance. Pope John XXIII convened the Second Vatican Council during my high school days so we experienced an interesting blend of tradition and progressiveness. Sister Ann Regis, a remarkably innovative woman, introduced us to new ways of thinking. Her wisdom continues to inspire me.

So on that sunny day in May, my friend Terri Tuerk and I walked up the side steps, formerly the student’s entrance into the building, where our high school education happened. We were warmly welcomed by Children’s Home staff and told we could tour to our heart’s delight.

When you’re a kid or teenager, buildings and properties seem bigger than life. If you have the opportunity as an adult to revisit those places, it’s amazing how everything seems to have shrunk during the ensuing years.

The building’s lower level formerly housed our lockers and classrooms for home economics and biology among others. It’s tastefully remodeled making accurate recall of the former layout difficult. Seeing a large expanse of space with numerous rooms and trying to remember how it was designed some 47 years earlier is challenging. Though young at heart, our memories play havoc with details, particularly when you mix teenage angst from back then to senior status today. Suffice it to say, we couldn’t write a documentary on the former AOL building.

Staircases are as large as I remembered. While walking up one, my mind immediately recalled changing classes and passing notes to friends. Carefully folded notes, sans signatures, were our precursors to today’s texts. I honestly don’t remember the policy on such behavior. If disallowed, I lucked out.

Second floor has the front steps we could never use, and the AOL insignia that took on a life of its own, as we were not allowed to walk on it. I didn’t break that rule as a student. Defying rules was not in my character then. There are no longer nuns or interested authority figures to oversee the area. Let’s just say defiance can happen even after one qualifies for Medicare.

Classrooms on third and fourth floors flood the memory bank. Latin, homerooms, and remembering geometry with its accompanying anxiety over angles and hypotheses still cause queasiness. No crossing in the middle of the hallway; no rolling skirts or teasing hair; wearing hot blazers and unattractive saddle shoes, and various other novel rules.

AN EDUCATION FOR LIFE
Like nearly every experience in life, it’s a choice of whether to focus on negatives or positives.

I’ll always choose the positive. The Academy of Our Lady was far from perfect, but it gifted us with a solid education, ways to deepen our relationship with God, ideas to spend a lifetime exploring, opportunities for critical thinking, people to remember forever, smiles, and stories to last a lifetime.