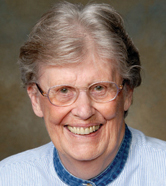 “She was a fantastic English teacher, phenomenal,” recalled Father Daniel Mirabelli, CSV, director of development at Alleman. Noting that Sister Betty chaired the English department for several years, he added, “When she retired it was a big loss for us.”

In retirement, she ministered in pastoral care by volunteering at a nursing home in Moline for nine years.

Preceded in death by her parents and two brothers, Sister Betty is survived by two sisters, two sisters-in-law, nieces and nephews, and the Sisters of Charity, BVM, with whom she shared life for 56 years.

Memorials may be mailed to the Sisters of Charity, BVM Support Fund, 1100 Carmel Drive, Dubuque, Iowa 52003, or made online by visiting bvmcong.org/whatsnew_obits.cfm.