Before career, U of I grad serves children in Uganda 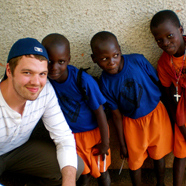 Photo Caption: John Sanderson poses with some new friends from the St. Jerome COVE Center in Kapeeka, Uganda. He will be sponsoring one of the students there next year.

Children heading back to school in central Illinois don’t have to worry about where they’re going to get fresh water to wash their hands or quench their thirst on a hot day. That can’t be said everywhere in the world, but John Sanderson of Peoria and a team of students from the University of Illinois did something to improve the situation for nearly 200 children in Uganda this summer.

An industrial engineering major who graduated in May, Sanderson went to Kapeeka, Uganda as part of the university’s Learning in Community program. LINC is an interdisciplinary, service-learning course in which teams of students work on projects proposed by community partners.

Among them is COVE Alliance Uganda — Children’s Outreach and Vocational Education. The St. Jerome COVE Center was founded by Father Hilary Muheezangango to serve the orphaned and disadvantaged children of that country.

“It was my senior year and I had a few open slots as far as courses go,” said Sanderson, who attended Holy Family School in Peoria and graduated from Peoria Notre Dame High School in 2009. He is the son of Lisa and Jerry Sanderson, associate superintendent of schools for the Diocese of Peoria.

“I hadn’t had much flexibility my first three years. I was looking for something where I could use the engineering knowledge I had and some kind of service opportunity,” John Sanderson said.

It’s fairly rare to find a Catholic organization partnering with a secular university and that’s what drew him to the project with COVE Alliance Uganda, he said. Sanderson and 12 classmates worked on providing a water filtration system for the St. Jerome COVE Center, which includes a boarding school for boys and girls as well as a clinic.

“They do have a well on campus, but a lot of times water can get contaminated from a lot of different sources — there are pit latrines and things like that,” Sanderson told The Catholic Post. “What we were doing as a class was looking for methods of water filtration that would be available locally there and easy for students as well as the teachers and people to use and would be sustainable moving forward.”

In addition to that need, the students worked on water testing and clean water education.

SQUARE ONE
“You really have to start at square one: What are bacteria? What are germs?” Sanderson explained. “A lot of the children are the equivalent of kindergarten or first grade age. Even the older children and a lot of the adults in the area haven’t necessarily been exposed to that type of education.”

While they initially looked at ways to design a water filtration system they discovered that others had been working on the same thing for many years. Rather than reinvent the wheel, they decided to get the technology that was already available into the hands of the people of Kapeeka.

What they chose was a biosand filter, which uses finely ground sand to kill bacteria. Working with the students and teachers they were able to install 20 of the filters at the school, which will provide enough clean water for the staff and the students at the school to use each day.

“That’s a big step. A lot of children get sick from the water and are sent over to the health clinic every week from e. coli and typhoid and things that can be present in the water,” Sanderson said. “That gets the kids out of school and starts the whole cycle. Having clean water is a really important step even to education.”

Two biosand filters were also installed in the clinic to insure that those who were sick wouldn’t get sicker and to expose people to the need for water filtration system. Workshops were held for the community as well as the students.

Funding for the project was provided through the COVE Alliance Board, which is based in the United States.

Sanderson said all of the students at the St. Jerome COVE Center are sponsored by someone. Next year a little boy who is also named John will be able to go to the school thanks to the University of Illinois graduate.

“I was learning more than I was teaching, I think,” Sanderson said. “One thing that really struck me was the focus on building relationships and hospitality that the people there had. A lot of times here we’re focused on what’s next or have this agenda, moving from one thing to the next. There people are very focused on living in the moment.”

He also noticed that faith is a big part of life and people aren’t afraid to talk about it. The seven students on the team from the University of Illinois went to a confirmation Mass that lasted for more than four hours. No one was anxious to leave, he said, because it’s a way for the community to come together.

Sanderson has a job waiting for him at Accenture, a technology consulting firm in St. Louis. He said he will take a little piece of Africa with him in the way he works with people, looking at where they are and not trying to do everything himself.

“I’m going to be going into new companies and listening to what their problems are,” he said. “I want to focus on relationships and talk to people.”