Another beloved O’Rourke is residing at St. Augustine Manor 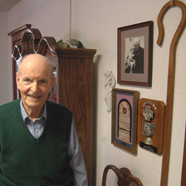 Photo Caption: Tom O’Rourke, the youngest brother of Bishop Edward W. O’Rourke and the late bishop’s only surviving sibling, is seen at St. Augustine Manor in Peoria, where the bishop lived in his retirement years.

There is another O’Rourke at St. Augustine Manor in Peoria.

And Tom O’Rourke, at 87 the youngest and last surviving of 10 siblings of the late Bishop Edward W. O’Rourke — who lived here in his retirement years — really needed to see only one room in the historic Peoria senior residence to make up his mind.

“After we saw that chapel, it didn’t take long,” he recalled of the day last winter he toured the facility with his son Tom. “It’s definitely the heart of our Manor,” he added. The chapel is the site of daily Mass and rosary for residents and is open at all hours for prayer and meditation.

In the eight months he has lived at St. Augustine, Tom has found his way into the hearts of many in this retirement community with his gentle spirit and deep faith. The feeling is mutual.

“The residents are some of the finest people I’ve ever known,” he told The Catholic Post last week. And then Tom praised each member of the “wonderful staff” by name, from administrator Jeri Myers through those who prepare and serve the food, the housekeeper, the night guardians, and the volunteers.

SMOOTH TRANSITION
It would take a special place to follow the love and companionship offered by his late wife Lorna, whom he deemed the “prettiest girl I ever saw” when the pair met at a parish party at St. Mary, Downs. “But she was only 15 then and I was 19,” said Tom. Four years later, when he sang at a wedding of one of Lorna’s sisters, Tom asked her out. They were married in 1950 and inseparable for 61 years, through the raising of five children and the final years as she battled dementia until her death in early December 2011.

And then there was Tom’s transition from rural Downs — where he was raised on the O’Rourke family farm and later farmed himself for many years — to a city and neighborhood so familiar to his famous brother, who guided the Diocese of Peoria from 1971 to 1990. St. Mary’s Cathedral and the diocesan offices are located a short drive to the south of St. Augustine Manor, and Bishop O’Rourke devoted his retirement years in the 1990s to serving the people of that part of the city in a special way.

Tom’s transitions could not have gone better.

“Every day I’m here I’m so glad to be here,” said Tom of St. Augustine Manor. He now counts Bishop Daniel R. Jenky, CSC, among his friends and neighbors.

“ARE YOU RELATED TO . . .?”
Tom is used to questions about his bishop brother, and fielded several a couple of weeks ago when fellow attendees at the Diocese of Peoria’s Catholic Charismatic Renewal Conference noticed his nametag.

“I always get that famous question, ‘Are you related to the bishop?'” said Tom, whose treasured memories include giving the same reading from the Book of Wisdom at Bishop O’Rourke’s ordination as bishop and then at his funeral in 1999.

While there were differences between the brothers — “I’m not very much of a perfectionist,” Tom says, recalling Bishop O’Rourke as “very precise” — it could be either O’Rourke speaking when the topics of farming and faith are raised.

“As a farmer, you realize because you are close to the earth, all the things — rains, temperatures — are out of your hands,” said Tom. “You plant the seeds and see how the season turns out.” And this year, he added, “the crops look wonderful.”

Both Bishop O’Rourke and Lorna loved to garden, with the bishop once giving Tom’s wife a plaque that read “There’s no place on earth you’re closer to God than in your garden.” The day Tom moved to St. Augustine Manor, he discovered that same saying carved on a stone on the grounds.

Serious heart problems keep Tom from gardening now, but he is grateful to be so close to God in the chapel and the people of this retirement community, especially at this stage in his life.

“The atmosphere, you can’t explain it. You have to live it,” he said. “It’s so peaceful.”