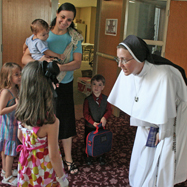 Photo Caption: Sister Maria Christi Nelson, OP, will teach first grade at St. Jude Catholic School in Peoria this year. She is pictured wpeaking with Kathryn Russell as her mother, Anna, and other siblings look on.

It was hard to tell who felt more blessed as parishioners greeted the Dominican Sisters of Mary, Mother of the Eucharist after Mass last Friday morning at St. Jude Church in Peoria.

The people who came up to introduce themselves and present their children said over and over again how lucky and pleased they were to have four members of the young community in the parish. Speaking to The Catholic Post a few minutes later, however, the Dominicans begged to differ.

“It’s wonderful to be welcomed like a family here. I think it’s more of a blessing for us than anything else,” said Sister Maria Christi Nelson, OP, who will teach first grade at St. Jude School. “We’re on the receiving end.”

“We’re overwhelmed with the goodness of the people,” added Sister Maria Canisius Willey, OP, who entered the community in 2010 and professed her first vows on Aug. 2.

“Everyone has been so generous and so welcoming,” said Sister Catherine Thomas Brennan, OP, who will teach at Peoria Notre Dame High School with Sister Maria Canisius. “We feel loved wherever we go.”

There’s so much love, in fact, that they plan more time for whatever they are doing because they know they’re going to be stopped for a visit, according to Sister Maria Christi, who said, “That’s a great thing.”

“When you go to a new place that’s what you hope for,” said Sister Agnes Maria Pineda, OP, who will have the homeroom for grades five and six and teach religion and language arts at St. Jude.

TEACHING, PREACHING AND PRAYING
The Dominican community, which is based in Ann Arbor, Mich., has 11 missions throughout the United States. Their missions to Peoria and Chicago are the first in the Midwest.

Sister Catherine Thomas explained that St. Dominic founded the Dominican Order to preach and teach the truth and that’s why the Dominican Sisters of Mary, Mother of the Eucharist have made Catholic education their primary apostolate.

Another gift they bring is their consecration as brides of Christ and they live this out by praying for everyone in the diocese every day. “Eucharistic devotion, Marian devotion are key for us,” she said.

In addition they seek to bring the grace of the new evangelization to the people they encounter by presenting the truth of the church in fresh ways.

“Catholic education is coming back, but it’s really the Sisters who will revive that,” Sister Maria Christi told The Post. “We’re blessed to bring that to the diocese and join the other Catholic grade schools. I hear they are awesome.”

Until a convent can be built for them on the St. Jude property, the Dominicans are living in a nearby house that was furnished through the generosity of parishioners. One of the rooms was converted into a chapel and Father Henehan made certain the Blessed Sacrament would be waiting for them when they arrived.

“Our first day was St. Dominic’s feast day. We could have adoration and our prayers, just as we would (at the motherhouse),” Sister Maria Christi said. “It’s beautiful to go from one house to another and have that continuity of our life wherever we go. That’s really thanks to Father and the parish for working so hard to make it home for us.”

— Sister Maria Christi grew up in Middleton, Wis., and completed her bachelor’s degree in liberal studies at Magdalen College in Warner, N.H., before entering the Dominican community in 2000. She professed her final vows in 2008. She received her teacher’s certificate with a major in science from Eastern Michigan University in 2005, and a master’s degree in elementary education in 2010 and a master’s degree in education administration in 2012 from the University of Southern Mississippi. She has taught in her community’s schools in Michigan, Arizona, Florida, South Carolina, and, most recently, Texas.

— Sister Agnes Maria grew up in San Diego, Calif., and earned a bachelor’s degree in psychology from the University of California in Los Angeles before entering the Dominican community in 2006. She professed her first vows in 2009. She received teacher’s certification with a major in social studies from Eastern Michigan University in 2011 and is working toward a master’s degree in language arts with a concentration in Spanish through the University of Southern Mississippi. She has taught fifth grade in Phoenix, Ariz., and sixth grade in Ann Arbor.

— Sister Catherine Thomas grew up in Houston, Texas, and received a bachelor’s degree in philosophy and history from Saint Louis University in St. Louis. After a year of volunteer work with the Missionaries of Charity, she entered the Dominican Sisters of Mary, Mother of the Eucharist in 2007. Oprah Winfrey featured the community in two episodes of her program in 2010 and was filming when Sister Catherine Thomas professed her first vows that year. She earned a master’s degree in theology form Ave Maria University in Ave Maria, Fla., in May, and will teach theology at Peoria Notre Dame.

— Sister Maria Canisius was born in Marshalltown, Iowa, and lived in Germany, Missouri and Iowa while she was growing up. She holds a bachelor’s degree in German and history with a minor in creative writing from the University of Northern Iowa and a master’s degree in early modern European history from Saint Louis University. She will teach German at Peoria Notre Dame.

“It’s wonderful. To have the Servants of the Pierced Hearts (of Jesus and Mary), the Dominican Sisters and the Sisters of St. Joseph of Carondelet here I feel like we hit the jackpot,” Msgr. Merdian said. “We’re not only honored but privileged to have them here and have them forming our young people.”

“The Dominican Sisters will increase that,” he said. “We’re excited.”