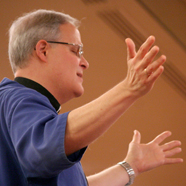 Photo Caption: Father Bob Hogan, BBD, speaks at the Catholic Charismatic Conference in Peoria on July 27. He offered practical advice for those wanting to give Jesus the driver’s seat in their lives.

Jesus wants to empower people and send them forth in his name, but first they have to put him in the driver’s seat.

“It is a surrender. It’s a letting go that allows (God) to give you the Holy Spirit,” Father Bob Hogan, BBD, said at the 27th annual Catholic Charismatic Conference July 27. (See related story here.) As you surrender to the Holy Spirit, he wants to empower you so you become a manifestation of the Spirit to other people.”

There are certain things a “sent person” must do to use the gifts of the Holy Spirit well, he told those gathered at the Four Points Sheraton in downtown Peoria.

Father Bob encouraged them to start their day by offering it to the Lord and then asking him to work through them. It is important to welcome the Holy Spirit as a partner and guide, he added.

“Pray about your day at the end of the day and look at what chances you missed,” Father Bob said, but cautioned them against being too hard on themselves. “Our first pope didn’t get it frequently. Peter made all kinds of mistakes, but he was the guy who kept learning.”

By praying this way, God will make them more attentive to the ways he can work through them, he said.

Conference participants were advised to be open to the Lord’s promptings to invite someone to talk, pray about a concern, or come with them to Mass or a prayer group meeting. They may also feel called to give their testimony and should heed that call — but start slowly.

“Give them the two-minute version and if they seem excited or interested then give them the five-minute version,” Father Bob said with a smile. “Don’t force it. Invite people. Be respectful of where they’re at, but always be ready.”

One of the things he asked them to pray for is “a greater zeal for the salvation of souls. The more zeal you have that everyone gets saved the more alert you’ll be to God using you.”

Zeal is also required “to enter the battle against evil,” he said, reminding them, “You have authority in Jesus’ name.”

LEARNING TO “SWIM”
A former lifeguard, Father Bob used the image of water to talk about what God can do.

“Water is fairly boring if you don’t know how to swim. All you can do is stand in it and splash yourself and splash anyone who’s close to you,” he said. “But once you learn to swim, water is so much more exciting. There’s all kinds of stuff you can do.”

Trying to be a person of faith without surrendering to the Holy Spirit is like standing in the water and not knowing how to swim, Father Bob explained.

“God still does some good things because God loves us, but they’re not experiencing the whole life they’re meant to experience,” he said. “As they learn to trust and let go and be baptized in the Holy Spirit, putting Jesus in the driver’s seat, then it gets a whole lot more exciting.”

He called forth anyone who had been praying for a baptism in the Holy Spirit and invited them to hold out their hands in a gesture of openness. As Father Bob extended his hands in blessing over them, he invited everyone else present to raise their rights hands in prayer, too.

There were many other opportunities for conference participants to pray for and with one another during the weekend, including eucharistic adoration, the Chaplet of Divine Mercy, and the sacrament of reconciliation. There was also a prayer room for those seeking extra assistance.

The theme for next year’s conference, which will be held July 25-26, is “Jesus Christ, Our Only Hope.” The speakers will be Father Richard McAlear and Annie Karto.