Wapella mother of 19 wants a baby shower for 90th birthday 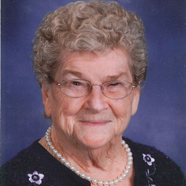 WAPELLA — For her 90th birthday, Rozanne Karr didn’t ask for much. She just wanted a baby shower.

Mrs. Karr knows more than a little about what it takes to raise babies since she had 19 sons and daughters with her husband, John. They gave her 46 grandchildren and now she counts her 47 great-grandchildren among her many blessings.

The baby shower won’t benefit her own family, however, but families in need throughout DeWitt County. The new and gently used items she receives at her party this Saturday, Aug. 3, will be donated to Dove Inc., a coalition of religious organizations, volunteers, and advocates that works to address unmet human needs and social injustices.

Each item will be tagged with a label to let the recipients know it comes to them “In honor of Rozanne Karr’s 90th birthday.”

The shower will be held from 1 to 7 p.m. at her house on the Karr family farm, 3 miles east and 3 miles north of Wapella. It is open to neighbors, friends and anyone who wants to offer their congratulations and help children.

Even though her birthday is in December, the milestone is being celebrated now so her family can gather before school resumes and fair weather makes for easier travel.

“We did this for my 80th birthday, too,” Mrs. Karr told The Catholic Post. “I knew some people who worked for Dove in Clinton and they were worried about having enough baby clothes. I didn’t need presents, but they did. They got quite a few.”

“It’s going to be awesome,” said her daughter, Amy Rueff of Decatur. “The thing about big families is we all get home sometimes but we don’t all get home at the same time. This will be really cool because everybody will be home.”

In addition to Illinois, Mrs. Karr’s extended family will be coming from around the United States, Canada and Sweden to attend the open house. That includes her “baby brother” John Tenny and his family from Oregon.

SHE WENT TO A DANCE
Mrs. Karr was pregnant from 1942 until 1966 and only had one set of twins, according to Rueff, the youngest at 46. The oldest is JoAnn Karr, a retired college professor in Chicago, who is 71.

Her grandchildren range in age from 7 months to 45, while her great-grandchildren are between 2 months and 20 years old. Traveling the farthest will be her granddaughter Leslie, who is coming from Stockholm, Sweden with her family.

It all started with a dance.

Born on Dec. 17, 1923, and raised in Des Moines, Rozanne Tenny moved to St. Louis after graduating from high school. On her first day there she went to a dance and met a young soldier named John Karr.

“He said he was a shoe salesman, but I knew he was a farmer,” she told The Post. “It was before World War II. They couldn’t get jobs so he joined the Army with his friends.”

She said she knew right away that he was “the one” and he felt the same way about her. He wasn’t Catholic so they got married in the priest’s office and then went to her mother’s house for a simple meal of fried chicken.

“John came from a family of 12. When we were dating we always said we would have 12 kids,” she said with a laugh. “We had one child and there was another on the way when he shipped out.”

It would be nearly two years until they saw each other again. In the meantime Mrs. Karr lived with her father-in-law, who still had three sons in high school and needed help. The house had no electricity or running water, but he took good care of her until her husband returned from overseas.

“GOD HAS BEEN GOOD”
Their family continued to grow and eventually the couple moved into the house his grandparents built on the central Illinois farm she continues to call home. One her grandsons now raises purebred deer on the 40 acres where they once grew a variety of crops and had chickens and cattle.
“I think she taught us all — we didn’t have a lot of money growing up — that somebody always has it worse than you do,” Rueff said. “You should help those who need it more.”

Mrs. Karr made their clothes, handing them down or swapping with the neighbors for as long as possible before removing the buttons to use for the next garment, Rueff recalled. “She always instilled in us how to be resourceful and make due with what we had.”

As busy as she was, Mrs. Karr was active at St. Patrick Church in Wapella and said her faith has always been a big part of her life. A longtime coordinator of religious education classes after Sunday Mass, she has also served as an extraordinary minister of holy Communion for 40 years and was a lector as recently as last Easter.

“I think she went to enough classes at the Diocese of Peoria to get a college degree,” Rueff said, adding with a chuckle that she always had 15 volunteers to set up tables and chairs for classes.

Mrs. Karr also belonged to the Altar and Rosary Society and served as its president for a time but had to give it up because “I had too much going on when the kids were in 4-H and everything else.”

“I loved it,” she said of her service at St. Patrick. “I never remember not liking what I was doing.”

Rueff said her mother continues to serve others.

“When she was 85 she started doing Meals on Wheels,” she said. “She also has a couple of friends she takes to the low-vision clinic in Clinton and they go to Dairy Queen to have kid’s meals.”

Despite everything — the loss of her husband 15 years ago after 56 years of marriage and the deaths of her son this year and three grandchildren — she says her life has been full of blessings.