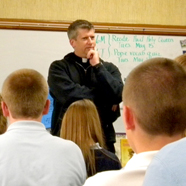 Photo Caption: Seminarian Matthew Deptula visits with eighth-graders at St. Philomena School in Peoria during a break from his own studies.

Students in Catholic schools around central Illinois are proud of their “big brothers” — all 31 of them — and the children are making sure they know it.

Those “big brothers” are the seminarians of the Diocese of Peoria, who receive cards, letters, drawings, photos and promises of prayer from the students as part of the Adopt-a-Seminarian program. The collaboration between the diocese’s Office of Catholic Schools and Office of Priestly Vocations formally started last year and proved so popular it will return.

The adoption program grew out of a conversation between Dr. Sharon Weiss, superintendent of schools, and the seminarians at their retreat last summer.

“I said one of my hopes in talking to them was to let them know of the incredible privilege and opportunity it would be for them to be involved in the schools now and as they become priests,” Weiss said. “It is a wonderful mission field for them to go in there and find more love than they can imagine.”

With the blessing of Msgr. Brian Brownsey, vocations director for the Diocese of Peoria, Weiss asked each school to adopt a seminarian.

“Some of the schools had multiple seminarians. One had (a seminarian) for every grade level,” Weiss told The Catholic Post. “I left it up to the principals to decide how they would do that.”

GETTING TO KNOW YOU
Prayer was a big emphasis, with students and their assigned seminarians praying for each other.

“We also told the school that the more they could reach out to the seminarian they could create more of a bond,” said Weiss, who asked the school principals to make certain their seminarians were remembered with cards at major holidays and Catholic Schools Week. “Some of them went beyond that and made little gifts for them.”

“It’s fun. You come to your mailbox and you’ve got a bunch of letters from little kids. They’re always kind of exciting,” said Cesarek, who was adopted by St. Matthew and Holy Cross in Champaign, Holy Cross in Mendota and St. Mary in Kickapoo.

“It’s a blast to be able to do that with them and to really get to know them,” he said.

Visits are encouraged, if possible, but Weiss asked schools to be sensitive to the fact that the seminarians had their own studies and would need family time when they were back in central Illinois during breaks.

Cesarek has been able to meet some of the students who have been writing to him and said the school visits make him feel “at home.”

“I’m getting to know a number of people all over the diocese that otherwise I wouldn’t have an opportunity to meet or talk to,” he said.

PRAYER PARTNERS
“Email is great. Phone calls and texting are great. But I always like to get that personal note in the mail,” said Kim Souba, who made the project part of her seventh and eighth grade language arts and religion classes at St. Mary in Kickapoo. “I thought it would be a great way for the students to get in touch.”

Before they started, Souba talked to the students about proper letter writing and what they might include. They wrote letters to their “prayer partners” each month, reviewing each draft with their teacher before writing the letter that would be sent.

They took every seminarian in the diocese, as well as Bishop Daniel R. Jenky, CSC, women religious, priests and deacons around the diocese, and family friends who were in formation. Souba said the response was “huge.”

“I tried to stress that it’s not that we’re trying to get something back from them. We’re doing it to show we’re supporting them and praying for them. When they did receive letters back they were surprised,” she said. “Most days it was two or three. It was a really good thing.”

The seminarians would send holy cards, photos and jokes, Souba said.
“When the kids got the letters they would read them first and then they’d read them to the whole class. So it was like the whole class got to know everybody,” she explained.

BECOMING FAMILY
At St. Mark School in Peoria, classes were matched with seminarians who would be ordained at the same time the class is graduating from eighth grade. Then they follow each other all the way through, according to Terry Mischler, director of religious education.

Because they are part of Msgr. Brownsey’s parish, the children get opportunities to see the seminarians during breaks and at the St. Joseph Newman Center for Bradley University. That makes them “family,” she said.

“These are our big brothers and we’re supporting them,” she told The Post. “They think it’s really cool that the seminarians are praying for them, too,” Mischler said. “There’s nothing more important than fostering that relationship of family and prayer. We’re there to support each other and cheer each other on.”

“What I appreciate about it is that it just makes our seminarians a normal part of our church family,” Msgr. Brownsey said, adding that the seminarians serve as witnesses to those who are considering their own vocations.

“They know people who have adopted that way of life and it’s not just about being a seminarian, but here’s a young man who took it seriously. Now I have to discern what God’s call is in my life,” he said.

“Our young people are in desperate need of heroes,” Msgr. Brownsey said. “I think our seminarians can be those heroes for our kids.”