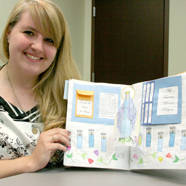 Photo Caption: Katie Bogner dispays a “pop-out” Marian Shrine she included in a religious education curriculum she designed that looks through the lens of Venerable Fulton J. Sheen’s life.

PEKIN — Fulton Sheen helped the fifth-graders at St. Joseph School learn about the sacraments, prayer and Mary last year and now he’s poised to do the same for children in religious formation programs around the Diocese of Peoria.

Katie Bogner, who developed a curriculum that lets students view spirituality and church teaching through the eyes of the Venerable Archbishop Fulton J. Sheen, will be the keynote speaker at the Catechetical Leadership Conference this Saturday, Aug. 3, at the Spalding Pastoral Center in Peoria.

She has also been encouraged to contact the National Catholic Educational Association about making a presentation at the annual gathering of teachers and administrators next April in Pittsburgh, Pa.

Bogner said she’s happy her lesson plans were so well received by her students, but “I never dreamed it would turn into this.” She credits the El Paso native, who is being considered for sainthood, for the success of the project.

“I introduced him to the kids and talked about how he was a local person and where he had grown up,” She told The Catholic Post. “They loved the story about how he was an altar server at St. Mary’s Cathedral and broke the cruet on the marble floor. Then I started pulling up YouTube videos and we watched little snippets of him speaking.”

They also viewed “Archbishop Fulton J. Sheen: Servant of All,” the 2010 documentary about the life of the man who went on to become a world famous media evangelist.

“They formed a very, very quick and strong bond with him,” Bogner said of her students. “I feel like he adopted them.”

“A NATURAL FIT”
Bogner, who is also director of religious education at Immaculate Conception in Lacon, explained that fifth grade is when students study the sacraments and said “it was a very natural fit” to bring Sheen into the discussion.

“I took the curriculum I needed to cover and told it through the lens of Fulton Sheen’s life,” she said. “We did a side journey on prayer because he made a Holy Hour every day. In our unit on Mary we told it through his life because he had such a devotion to her.”

Activities for the Marian unit included a “pop-out” shrine, complete with pictures of votive candles and roses to color and cut out as decorations. Bogner also gave them “My Favorite Marian Prayers” to learn and make into a flip book. Among them was one of Sheen’s favorites: “Lovely Lady Dressed in Blue.”

“We watched the video of him first,” she said. “The more we talked about it the more we filled the pieces in. You can’t do somebody’s life in an hour.”

After talking about the World Mission Rosary developed by Fulton Sheen when he was director of the Society of the Propagation of the Faith, the class created a giant replica, making the “beads” out of green, blue, white, red and yellow strips of paper. Bogner also provided plenty of “Fulton Facts” and quotes that could be made into note cards.

When they discussed the beatification and canonization process, Bogner invited Bonnie Engstrom of Goodfield and her son, James Fulton, to visit. A diocesan tribunal investigated the alleged healing of James — who did not have a heartbeat for 61 minutes after his birth — through the intercession of Venerable Fulton Sheen and sent the findings to the Vatican Congregation for the Causes of Saints in 2011.

SURPRISE FIELD TRIP
Just before school ended the 29 students boarded a bus, but didn’t know where they were going. They received clues along the way and it didn’t take long for them to figure out that they were headed for El Paso and St. Mary Church, and then Peoria to explore the Fulton J. Sheen Museum at the Spalding Pastoral Center and St. Mary’s Cathedral.

“I thought they were just like any other school group so we began with the basics about Fulton Sheen and the cathedral. No. These kids knew what they were talking about,” said Msgr. Stanley Deptula, executive director of the Archbishop Fulton J. Sheen Foundation and rector of St. Mary’s Cathedral.

“It was wonderful. They had studied it and they made this connection,” he told The Post. “You could see their faces just light up when they got to see some of the places or the things that they had studied about.”

He used the words “inspired” and “genius” to describe Bogner’s curriculum. He was so impressed, in fact, that he included information about it in a newsletter sent to 200 bishops around the world who serve on the Sheen foundation’s episcopal board of advisers.

“I’m hoping some of them will take the bait and be interested in bringing Fulton Sheen to their diocese through their schools,” Msgr. Deptula said.
Bogner has another fan in Shannon Rogers, principal at St. Joseph School.

“She inspires her students each and every day and she brings our religion to life for each child,” Rogers said. “Katie’s students truly understand and appreciate the history of Fulton Sheen.”

Bogner remains humbled — and a little amazed — about it all.

“I think the fact that it’s timely and it’s relevant and it’s going on here in their backyard made it very easy to connect him with our curriculum” Bogner said.

“They can look to him as an example and know that all of us are called to holiness — that was a big message we got through this,” she explained. “It’s not just a few people who are called to sainthood. We all are.”