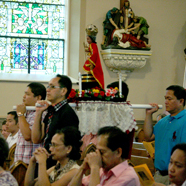 Photo Caption: An image of the Santo Nino de Cebu is carried by Al Cuizon, Alex Morales, and Alfredo Cuizon during a eucharistic procession through St. Joseph Church in Peoria on July 20.

For 15 years, Filipino Catholics have filled St. Joseph Church in Peoria to pray and sing of their love for the Christ Child under the title of Santo Nino de Cebu. As they did so this year, Bishop Daniel R. Jenky, CSC, assured them they were teaching the whole church “something wonderful about God.”

“God loves us so much that he became small so that we could become great,” he told them at Mass on July 20. “The Master of the Universe, the One who sustains all things, became a child so that we could all become children of God.”

He encouraged them to celebrate, “but most of all let us open our hearts and our lives to the wonder of God’s great love.”

Many images of the Santo Nino de Cebu were brought to the church and one of the larger statues was carried in procession at the beginning of Mass. It also led the way during a eucharistic procession throughout the church that ended with Benediction.

After Mass, Bishop Jenky stayed behind to bless the Santo Nino images — large and small — people brought from home for the annual celebration.
A potluck reception and cultural dancing in honor of the Infant Jesus, followed in the parish center.

IN EVERY HOME
Veneration of the Infant Jesus of Cebu dates back to the Christianization of the Philippines. Considered the oldest religious relic in the island nation, the original Santo Nino statue was given by Ferdinand Magellan to Queen Juana as a baptismal gift on April 14, 1521. It is now enshrined in the Basilica del Santo Nino in Cebu City.

It is tradition for Filipino families to turn their images of the Santo Nino toward the door to greet visitors.

Anna Liza Raboza of Holy Family Parish in Peoria said their image of the Infant Jesus is kept in the room of her daughter, Hayden Chloe, along with a cross from Jerusalem. At the July 20 Mass, Hayden brought forward her grandmother’s Santo Nino to be blessed by Bishop Jenky.

“It’s important to remember our traditions and our culture,” said Anna Liza, who came to the United States from Cagayan in the Philippines in 1995. “Even though my daughter is English speaking I want her to know our culture.”

Red was a prevalent color at the Mass and she explained that it is a color that symbolizes their faith in Jesus.

Carved in wood, the Santo Nino image brought to church by Mila Hojilla-Evangelista of Holy Family in Peoria was a wedding gift in 1985. The Infant Jesus has guarded her son, Roderick, since he was 4.

Others, like Nympha White of St. Columba in Ottawa, have images of the Santo Nino de Cebu in almost every room of their house. She also carries one in her purse and often holds it in her hand, she said, adding, “I pray the novena every week.”

She went to college in Cebu City and said people there visit the Basilica del Santo Nino for prayer from 6 a.m. to 7 p.m. “The church is swollen all the time.”