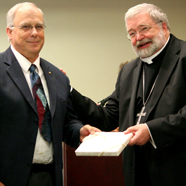 Photo Caption: Jim Kovac, the diocese’s 2013 Distinguished Principle, accepts a token of appreciation from Bishop Daniel R. Jenky, CSC, at the closing luncheon for pastors and principals on June 5.

SHERRARD — He may have retired from teaching and coaching at Sherrard High School in 2007, but Jim Kovac wasn’t really ready to leave education behind.

That proved to be good news for Costa Catholic Academy in Galesburg, where he has served as principal for the last six years. Even though he stepped down last Wednesday, he still isn’t leaving for good.

Kovac will continue to support Costa Catholic by working with new principal Jill Marasa and the committee overseeing a $2.1 million capital campaign that was launched in May. “Treasuring Our Past — Securing Our Future” will enable the former high school to expand and bring all the students from two buildings to one site.

“I’ve gotten to know a lot of people and made a lot of contacts. I know the families here. I want the school to move forward,” Kovac told The Catholic Post. “I didn’t want to start something and step away — to leave it for someone else.”

He said he will stay with the capital campaign until construction on the new addition begins.

It’s that kind of dedication to his students, staff and community that made him the 2013 Distinguished Principal for the Diocese of Peoria.

“Jim is very respected in the educational community. His vision and tenacity to see an idea through to completion is exemplary,” according to Dr. Sharon Weiss, superintendent of Catholic schools.

She attended the launching event for “Treasuring Our Past — Securing Our Future,” at which Kovac served as master of ceremonies. Weiss said his congeniality and passion for what he does was evident and noted that there was “a sense of shared mission.”

“Jim Kovac’s leadership has been instrumental to ensure that Catholic education will be available for many years to come at Costa Catholic Academy,” she said.

“LIKE EVERYONE ELSE”
Kovac knows the value of Catholic education from personal experience. He grew up in Streator and graduated from St. Stephen’s School there before going on to Woodland High School.

After earning a bachelor’s degree in physical education with a minor in biology from Western Illinois University in Macomb he taught sixth grade at Andalusia Elementary School and then worked in the Winola School District. When Winola was merged with Sherrard High School in 1988, Kovac went there as a teacher and coach, and eventually served as activities director.

“I like working with kids and shaping their minds, bodies and spirits,” said the man who was head coach of the Sherrard football team for a time and has coached basketball and track. “There’s a good sense of satisfaction in seeing young men and women progress. It’s good to be able to work with young people and mold them.”

Sports teach students that there are certain rules and regulations that must be followed and that they have to be disciplined if they want succeed, he added.

When his son and two daughters were in college he went back to school to earn master’s degrees in sports management and education administration. As he approached retirement from Sherrard, his wife, Barb, saw that Costa Catholic needed a principal and suggested he apply.

“I knew that education in a Catholic school is a totally different environment. The kids are there because their parents want them to be there and the kids know there’s a lot expected of them,” Kovac explained. “It’s a great environment to be a principal.”

A member of Mary, Our Lady of Peace Parish in Orion, Kovac has worked hard to provide strong spiritual leadership at Costa Catholic and praised the teachers there for offering a good religious education program.

“As a spiritual leader I think we have to be aware of their educational needs, but also their spiritual needs. At a Catholic school that’s what we stress — service and spirituality,” he said.

Asked about the Distinguished Principal award, Kovac tries to deflect the attention away from himself.

“It’s an award that any one of our principals is deserving of. I don’t know why I was picked,” he said. “I was doing my job just like everyone else.”