Surgical milestone in Peoria offers hope for toddler, others 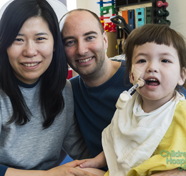 Photo Caption: Hannah Warren is pictured with her parents, Darryl and Young-Mi, at the Children’s Hospital of Illinois where she received a tissue-engineered, bioartificial trachea.

A surgical milestone. Revolutionary science. The future of organ transplantation. An unbelievable journey.

There was no lack of superlatives — or emotions — April 30 at a press conference announcing a world’s-first operation that took place at the Children’s Hospital of Illinois, part of OSF Saint Francis Medical Center in Peoria.

During a nine-hour procedure on April 9 that was two years in the planning with collaborators from around the world, a 32-month-old girl from South Korea received a much-needed new windpipe.

What made the transplant operation on young Hannah Warren historic is that the life-saving organ came not from a donor, but rather was generated in a lab. The tissue-engineered, bioartificial trachea is a “living structure” produced using plastic scaffold seeded with the child’s own stem cells drawn from bone marrow.

The successful surgery not only offers hope for Hannah and her family, but “opens the door to a new and exciting era in transplant medicine and pediatric care,” said Dr. Richard Pearl, surgeon-in-chief at Children’s Hospital of Illinois. Because no donor organ was used, the procedure virtually eliminates the chance of her immune system rejecting the transplant.

“It’s like a new chapter in medicine,” said Dr. Pearl, one of three main surgeons to speak at the press conference. Addressing local media on site as well as international press via live streaming on the Internet, he said “You’re looking into the future right now.”

“UNBELIEVABLE BLESSING”
Never lost in the heady research and technology were the emotional, ethical, and spiritual aspects of the groundbreaking procedure in the life of a little girl and her family who are a long way from home. (See related editorial here.)

The younger of two daughters of Darryl and Young-Mi Warren, Hannah was born with a rare, fatal congenital abnormality in which her trachea failed to develop. She had never swallowed, tasted, smelled or eaten, and had spent her life in the neonatal intensive care unit of a hospital in Seoul, South Korea.

Her parents and even her surgeons shed tears at the press conference.

“I cannot express what this means to me as a scientist, as a man, as a father,” said Dr. Paolo Macchiarini, professor of regenerative surgery at the Karolinska Institutet of Stockholm, Sweden and lead surgeon in the case. Calling it a pinnacle of 25 years of research, he praised Children’s Hospital of Illinois as a “world-class hospital” and lauded its personnel so “dedicated to the care and love of children.”

“This is the exact place where she should be and deserves to be,” said Hannah’s father. A native of Canada, Darryl Warren told the group of media and hospital personnel that Hannah has taught her family that “blessings come in many different shapes and sizes.” While the journey has been difficult, “we soon realized (Hannah) was the most unbelievable blessing that any parent could receive.”

Sister Judith Ann Duvall, OSF, who chairs OSF Healthcare System, opened the gathering with a prayer thanking God for “the miracle of Hannah’s birth, and the miracle of her rebirth among us.”

“Be with us today as we gather to share this child’s unbelievable journey with our world, and give us the passion and the wisdom to take what we have learned together to continue to bless our world,” she prayed.

JOURNEY TO PEORIA
How Hannah and her family came to Peoria was explained by Dr. Mark Holterman, professor of surgery and pediatrics at the University of Illinois College of Medicine at Peoria and co-surgeon of the case.

When Dr. Holterman visited South Korea more than two years ago, he was introduced to Hannah and her parents by a nurse with whom he had formerly worked. “We don’t know how to fix our child,” Hannah’s parents would tell him.

Through online research, they learned of Dr. Macchiarini’s work with regenerative medicine in Sweden. While the Karlinska Intitutet could not take the case, Dr. Holterman approached the leadership at OSF Saint Francis and Children’s Hospital about “bringing Hannah to Peoria and fixing her here.”

“There was a lot to this procedure,” acknowledged Margaret Gustafson, president of the Children’s Hospital of Illinois. She listed the international teams of experts and “philanthropic vendors” who joined the growing “family” seeking to help Hannah.

“The good work we have accomplished — the clinical and the logistical, the emotional, the spiritual and the scientific — all came together with one true purpose, to help Hannah reach her full potential,” said Gustafson.

She described the toddler as “delightful, impish and intelligent,” an inspiration, and “a great representative for all of our children.”

MORALLY, ETHICALLY SOUND
Dr. Holterman said it was the first such stem cell therapy at OSF Saint Francis Medical Center. While the Catholic Church opposes the use of stem cells taken from human embryos because it requires the death of that unique human person, Hannah’s bioengineered trachea was seeded her own “adult” stem cells.

“The beauty of what we did for Hannah is we used non-embryonic stem cells,” said Dr. Holterman. There are no ethical concerns, no scientific concerns. And it allows us to help her body fix herself, without the risk of anti-rejection medicine, without the waiting list of waiting for someone to die.”

“This opens up a whole new area where we can fix a lot of our children with birth defects,” he said.

A team of ethicists helped discern the best courses of action during the last two years. Serving on that team is Birgitta Sujdak Mackiewicz, director of ethics at OSF Saint Francis Medical Center.

“The use of adult stem cells affirms the dignity of the human person, unique and of incomparable worth,” she told The Catholic Post. “Therapies utilizing adult stem cells, here Hannah’s own, are in principle morally sound and encouraged.”

Sujdak Mackiewicz said the experience gained in the process “will benefit many others going forward as similar research and surgeries are pursued.”

“As a member of the OSF family, an ethicist, and a mother, this affirms the vocation I’ve pursued working to serve human persons and the church in my work in health care ethics,” she said.

The sense of gratitude was shared by many in the room, and beyond.

“Thank you all for joining in Hannah’s party,” said the girl’s father. “Her incredible journey is just beginning.”

It is expected that in the coming months, Hannah will be able to return home with her family and lead a normal life.