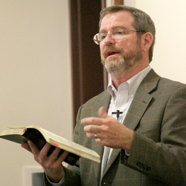 Photo Caption: Author and Catholic media personality Jeff Cavins told a crowd at the Spalding Pastoral Center in Peoria on April 27 “when it comes to the spiritual life with God we are not meant to be sedentary.

Jeff Cavins is a big fan of walking and recommends doing it often — with God.

“When it comes to the spiritual life with God we are not meant to be sedentary. We are not meant to just sit and learn,” the popular author and workshop presenter told the 250 people who came to the Spalding Pastoral Center in Peoria for a daylong presentation on April 27.

“We are meant to take what we learn and keep moving,” said Cavins, director of the Archbishop Harry J. Flynn Catechetical Institute in St. Paul, Minn. “We should be walking with God on a daily basis.”

He gave participants some ideas for moving forward, with a special focus on the practice of lectio divina or “divine reading.”

Cavins also recommended looking back as a way of moving forward with an Ignatian prayer form called the Examen. He explained that this is designed to help us examine our hearts and then enter into a dialogue with God about where we are and where we need to go.

“If our goal is to journey toward the beatific vision we need something that says, ‘Am I on track?'” Cavins said.

Departing from previous visits, which featured overviews of the Bible studies he developed for Ascension Press, Cavins only touched briefly on his newest endeavor, “Walking Toward Eternity.” A collaboration with his wife, Emily, the two eight-part series came out of a conversation they had about the need to help people slow down and explore everyday topics, using lectio divina as a way of bringing God into the conversation.

In that vein, he said his day in central Illinois was intended to be more of a retreat than a seminar.

A RELATIONSHIP
Cavins described lectio divina as “a warm relationship between you and Jesus.”

He said it’s very easy to fall into the trap of speaking about Jesus and going to seminars rather than engaging in true intimacy with God.
“It only takes about 20 minutes — less than 1 percent of your day — to leverage a real relationship with Jesus and the church,” Cavins explained. He advised them to start by getting “a Bible you can live in” as well as a notebook and a pen.

There are four steps in the process, each taking about five minutes. The first is to select a “bite size” portion of Scripture and read it through a few times. This could come from the Scripture readings for Mass or a randomly selected passage of the Bible.

“Don’t look for meaning yet. Just notice what words speak to you,” he said.

The second step is to give your mind over to God and being attentive to what is rising out of that reading. Cavins said. Then move into prayer, using the themes you have picked up from Scripture.

“Begin to talk to God,” he said. “Say ‘What are you asking of me?’ and then allow him to speak to you in his Word.”

The final step in traditional lectio divina is contemplation or what he called “resting in God’s arms” and “enjoying the fruit” of the dialogue. Cavins adds a fifth step — finding ways to act on God’s Word.

“The world is longing to see the Word made flesh,” he said.

START WITH THANKS
Many people use lectio divina to begin their day and the Examen at the end of the day, according to Cavins.

There are also five steps to the Examen, starting with thanksgiving.

“We’re looking back and saying, ‘Wow. You have really blessed me,'” Cavins said. “For St. Ignatius there was no surer way to grow in love, the love of God, than to consider the many blessings he gives us every day.”

The second step involves a simple petition: “Jesus show me what you want me to see.”

After reviewing the past, Cavins said it is time to repent in the present.

“We need to ask for forgiveness. Invariably we will find moments of failure and moments of sin and times that we’ve resisted God’s grace,” he said. “We bring those to Christ and he helps us with those. He forgives us and shows us the way we should have walked.”

The final step is looking to the future with a resolve to think, speak and act differently, Cavins said.

“There is no standing still in the kingdom of God,” he said. “If you’re tired of the same-old same-old this practice can really help us to walk faithfully and fruitfully with God.”

Cavins’ workshop was sponsored by the diocesan Office of Catechetics. He has agreed to return next April for a two-day seminar on the Gospel of Matthew, according to Dr. Vincent McClean, director of the office.