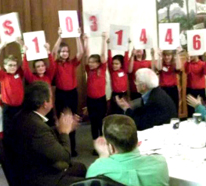 Photo Caption: Students from Costa Catholic Academy hold up numbers announce the sum of lead gifts at the close of a capital campaign launching event May 3.

GALESBURG — A capital campaign to build an addition at Costa Catholic School and bring students and faculty together under one roof is off to a promising start.

At the close of a campaign launching event Friday evening attended by more than 250 school families and friends, students from Costa came forward and held numbers up to announce how much has already been raised in the “leadership gift phase.”

It took seven students to hold the numbers — plus one for the dollar sign.
That means the campaign, on the theme “Treasuring our Past — Securing our Future,” has already passed the $1 million mark toward a goal of $2.1 million with the help of 30 lead donors. All parish families in Galesburg are now being invited to financially support the project.

“There is a lot of positive energy and excitement,” said Jill Marasa, a music teacher at Costa for 15 years who will become principal after this school year. “People are stepping forward who have had ties to the Catholic community for decades, expressing gratitude for their own Catholic education.”

At present, the Costa campus includes pre-school through second grade in one building nearer to Immaculate Heart of Mary Church and third to eighth grades in the former high school building just to the north on Costa Drive.

Plans call for an addition to be built on the Costa Drive site that would enable all students to gather there. Among the proposed new rooms are:

— A multi-purpose room that will serve as a half-gym and a cafeteria, with an adjacent serving kitchen and storage areas;

— A technology lab, and

“We’re ‘right-sizing’ our building to accept all grades and teachers under one roof for safety, collaboration, and improved student learning,” said Marasa. Costa currently enrolls about 220 students and the move is “a step to ensure Catholic education for generations to come,” she added.

The launch event at Seymour Hall of Knox College followed a series of feasibility study meetings in recent months coordinated by Joseph Consulting of Bettendorf, Iowa. Information has been distributed through the school as well as the Galesburg parishes of Corpus Christi, Immaculate Heart of Mary, and St. Patrick’s.

Following the May 3 dinner was a program with a keynote address by David Anderson, a former Costa graduate, and a project overview from Bob Johnson from Metzger Johnson Architects. Four Costa families and friends offered their endorsement of the campaign, including Jim Kovac, principal, who is retiring at the end of this school year, Todd and Shannon Krisher, Pat and Nicole Kisler, and Pat Conklin, and a school-produced video was shown.

Throughout the summer, all parish families in Galesburg will be invited to financially support the project.