Celebrate the ethical witness of milestone transplant as well 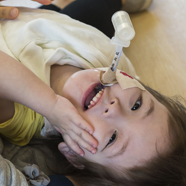 Photo Caption: In a nine-hour transplant operation April 9, Hannah Warren received a tissue-engineered, bioartificial trachea created by seeding a plastic “scaffold” with her own stem cells drawn from bone marrow.

The medical and scientific advancements celebrated with last month’s landmark transplant surgery performed at Children’s Hospital of Illinois in Peoria (see story here) made headlines around the world. But as happy as we are for young Hannah Warren — who can finally learn to swallow, taste and smell and may soon know what it’s like to live with her family — and as proud as everyone can be of the local and international teams that made the milestone in regenerative medicine happen, there is one more important aspect to the story we should all celebrate and derive hope from.

The detail paid to the many ethical aspects of Hannah’s case might be as impressive, and in time as far-reaching, as the science.

“The use of adult stem cells affirms the dignity of the human person, unique and of incomparable worth,” said Birgitta Sujdak Mackiewicz, director of ethics at OSF Saint Francis Medical Center, where Children’s Hospital of Illinois is based. “This research does not require the death of one person to save another, as the use of embryonic stem cells does.”

The success of Hannah’s surgery, in which her own stem cells were used, gives evidence to “the gift of healing that God has provided within His plan, and the wonder of the human body’s capacity for repair,” Sujdak Mackiewicz told The Catholic Post. And with each success, there is less reason for some in the medical community to pursue the use of embryonic stem cells, a practice the church considers morally illicit.

While the moral soundness of the stem cell research was one ethical component in Hannah’s surgery case, it was far from the only one. Was Children’s Hospital of Illinois, so far from the family’s home in South Korea, the best place for Hannah’s surgery? Were the potential risks of the transplant acceptable for Hannah in light of the potential benefit sought? What were the boundaries for professional staffs in working with Hannah’s family? What about the family’s privacy in light of the news-making procedure? And then there was the sizable investment of resources, both human and financial. What impact would that have on Hannah, current patients, future patients?

The answers to these and other ethical matters were discerned by a sizable team that included Sujdak Mackiewicz, Steve Mattern, vice president of mission services at OSF Saint Francis Medical Center, and Dr. Joseph Piccione, corporate ethicist for OSF Healthcare System.

“This is the longest ethics consultation in which I’ve been involved,” said Sujdak Mackiewicz of the two-year process. But it was also among the most rewarding.

“As a member of the OSF family, an ethicist, and a mother, this affirms the vocation I’ve pursued working to serve human persons and the church in my work in health care ethics,” she said. “The experience gained in this process will benefit many others going forward as similar research and surgeries are pursued.”

And that’s yet another reason for all Catholics to celebrate this remarkable accomplishment. — Thomas J. Dermody