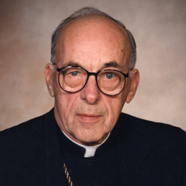 Photo Caption: Bishop Arthur J. O’Neill, retired bishop of the Diocese of Rockford, died April 27 at his residence in Rockford. Bishop O’Neill, 95, was appointed bishop of Rockford in 1968, and served until 1994.

ROCKFORD, Ill. (CNS) — Retired Bishop Arthur J. O’Neill of Rockford died April 27 at his residence. He was 95 and recently celebrated 70 years in the priesthood.

He was appointed bishop of Rockford Aug. 19, 1968, becoming the first native-born priest of the diocese to serve as its bishop. He served in the position for more than 25 years until retiring in 1994.

Rockford Bishop David J. Malloy said in an interview on a Rockford radio station that Bishop O’Neill’s tenure as bishop occurred during a time of social upheavals and challenges in American society.

Bishop O’Neill has been “impacting our spiritual and, in a particular way, our family lives,” he said. “It is greatly to his credit that he kept everyone on the same page (and those benefits have) passed on to Bishop Doran and, frankly, to me, and I’m very, very grateful for that.”

Retired Bishop Thomas G. Doran of Rockford recalled meeting Bishop O’Neill, then a young priest, for the first time as a first grader in St. James School about 70 years ago. He described him as having a great influence on his life and as a priest.

“He was a valued friend in my years of priesthood (and) our lives were intertwined in that way for seven decades,” he said.

“I must say that Bishop O’Neill was very, very kind always to me when I became a bishop,” Bishop Doran added. “He never interfered, but he was willing to be a consultant … Up until the last couple of years, he was always willing to help out.”

Bishop O’Neill was a strong advocate for Catholic communications efforts. He became editor of The Observer, the diocesan newspaper, in 1954 and served in the position until 1968. Other media-related efforts included the establishment of Office of Communication and a weekly television Catholic Mass for shut-ins.

During his tenure, Bishop O’Neill established several parishes, and in 1970, he designated that St. Peter Church in Rockford would be the new cathedral for the diocese. He established a vocation commission, a Diocesan Board of Pastoral Mediation and Arbitration, started an apostolate for Spanish-speaking members of the diocese that evolved into an Office for Hispanic Ministry, called a Pastoral Synod in 1974 and established financial programs to fund diocesan apostolates and programs and govern diocesan investments and loans.

In addition, he opened three nursing homes for the elderly and a retirement home for priests. He ordained the diocese’s first class of permanent deacons in 1975 and established a ministry formation program for people of the diocese.

Bishop O’Neill was born Dec. 14, 1917, in East Dubuque, Ill., to Leslie J. and Clara O’Neill. He began enrolled in Loras College before continuing studies for the priesthood at St. Mary’s Seminary in Baltimore.

At the diocesan level before his episcopal ordination, he served as an associate pastor at a parish, director of the Holy Name Society, head of the Diocesan Commission on Sacred Music and was a judge of the then-diocesan matrimonial court, now the diocesan tribunal. He received the title of monsignor in 1963.

A funeral Mass was to be celebrated May 3 at the Cathedral of St. Peter in Rockford. Burial was to be at St. Mary/St. James Cemetery.