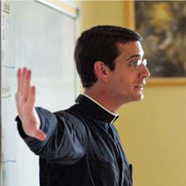 Vincent Giacabazi, SJ, knows what Pope Francis means when he talks about the need for priests to “put their own skin and own heart on the line” and “be shepherds with the smell of sheep.”

The Peoria native has been called to do just that time after time since entering the Society of Jesus — the same religious community that shaped the new pope’s priestly ministry — in August 2005. Giacabazi professed perpetual vows of poverty, chastity and obedience in 2007 and as a Jesuit scholastic is pursuing theology studies at the School of Theology and Ministry at Boston College.

He acknowledged that before Pope Francis’ election the Jesuits were probably best known in the U.S. for their universities, especially the basketball programs.

“But Jesuits are also involved in ministry to and accompaniment of refugees and migrants and in other works in the social apostolate, inter-religious dialogue, parish ministry, secondary and primary education, especially among the poor, the offering of the Spiritual Exercises (of St. Ignatius) in various settings and so on,” Giacabazi told The Catholic Post. One of their particular ministries is promoting the intentions of the pope through the Apostleship of Prayer.

He added that the spokesman for Pope Benedict XVI and now Pope Francis is a Jesuit priest, Father Federico Lombardi, and that the scientists at the Vatican Observatories in Rome and Tucson, Ariz., are members of the Society of Jesus.

It was that diversity of ministries and commitment to the poor and marginalized that drew him to the Jesuits.

SERVICE AND PRAYER
Born in Peoria, Giacabazi attended Holy Family Parish and said his family remained members even after moving to Washington. His mother, Nora O’Neill, helped to establish the parish’s perpetual adoration chapel and was the parish nurse. His father, Bernard Giacabazi, continues to be active in the RCIA and hospice outreach.

He went to Peoria Notre Dame High School, graduating in 2000.

“I had certainly thought about (the priesthood), but I wasn’t ready to enter a seminary of any kind,” he said, although he had looked into the novitiate of the Conventual Franciscans who had a “wonderful influence” on him at Holy Family.

Giacabazi first encountered the Jesuits at Saint Louis University, which was founded in 1818 and is the oldest university west of the Mississippi River. A class on the Gospel of Mark and Catholic social teaching had a seminar component and an active component that had him working at a shelter for women in crisis.

While he was starting to experience how the Jesuits live out the church’s preferential option for the poor, Giacabazi and his father developed a tradition of going to the preached retreats at White House Retreat in St. Louis. The Jesuit retreat center focuses on the Spiritual Exercises of St. Ignatius, the founder of the Society of Jesus.

“Out of that experience I learned how to be more attentive to my prayer and how to be attentive to discern the will of God in my life,” Giacabazi explained. “The combination of the professors who inspired me academically, broadened my horizons on how to think, how to write and how to engage the world, as well as the campus ministers dealing with the heart, and mixing those two together with the retreat, I started to think, ‘Maybe I could be one of those guys.'”

After graduating from Saint Louis University in 2004 with a double major in political science and international studies and minors in Spanish and theology, he taught at Rockhurst High School in Kansas City for one year as part of the Jesuits’ Alum Service Corps. At the end of that time, he applied to the Jesuits and was accepted.

LEARNING TO RELATE
The Jesuit formation process is a long one — two years of novitiate, two to three years of “first studies” in philosophy and theology, three years of regency during which candidates typically work in a Jesuit high school or university as a teacher or campus minister, and three more years of theology studies.

Giacabazi said that after ordination, a new priest receives an assignment and then will return for tertianship. This is a yearlong process of revisiting the foundational documents of the Society of Jesus, working among the poor, and undertaking the Spiritual Exercises of St. Ignatius, a 30-day silent retreat, for a second time.

Along the way there are opportunities not just to study poverty and what it means to be rejected, lonely and lowly, but to live it. During his studies at the novitiate in St. Paul, Minn., for example, Giacabazi was given a one-way bus ticket to El Paso, Texas, and $30 and instructed to return in 30 days — not a day before or a day after.

“The idea was to rely on the goodness of strangers, to ask them about their life and tell them about your life, if asked. The whole time on this pilgrimage you’re seeking a special grace,” he told The Post.

“It was awesome,” Giacabazi said. “Unless a Christian has a direct experience of helplessness and utter poverty — spiritual or actual — it’s hard to relate on an intimate level with people who live that day in and day out. Jorge Bergoglio (now Pope Francis) would have had a similar experience.”

He completed his first studies in philosophy and theology at Regis College at the University of Toronto and spent his regency teaching at De Smet Jesuit High School in St. Louis. Giacabazi expects to be at Boston College through 2015.

No matter what he does in the future, one thing is certain.

“We are called by Christ, through discernment with our superiors, to be men on mission in the world, helping souls to be ever more aware of the Risen Lord, active and alive in our midst,” Giacabazi said.