Diocese hosts state convention of the Daughters of Isabella 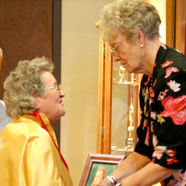 Photo Caption: Evelyn Ribordy, past state regent and current regent of Pontiac Circle No. 122, is congratulated and thanked by International Director Lucille Reif.

HENRY — “Faith and Friendship with the Daughters of Isabella” was celebrated when representatives of the fraternal organization from around Illinois gathered at Nazareth House here last weekend for their biannual state convention.

In prayer they lifted up their members who have died since the last state convention, and in the business meetings that were conducted April 19-20 they raised issues that need further study. One of the priorities for the next two years will be recruiting new members and retaining current members, according to Sharon Hengehold of Edwardsville, state regent.

Acknowledging that women are pulled in many different directions, Hengehold said the Daughters of Isabella offer support and it’s right there in their motto: “Unity, Friendship, Charity.”

Members also reach out to those in need through their circles. There are 12 circles in Illinois and two in the Diocese of Peoria — Our Lady of Victory Circle No. 228 in Henry and Pontiac Circle No. 122 in Pontiac, both of which hosted the convention.

A weekend at a retreat house didn’t stop the organization’s charitable work. Members held a baby shower, bringing items for layettes that will be distributed through the Christ Child Society of Central Illinois.

UNITY, FRIENDSHIP AND CHARITY
Helping them to reflect on their motto was Sister Diane Vande Voorde, OSF, vice president of the Sisters of St. Francis of the Immaculate Conception and assistant director of the diocesan Office of the Permanent Diaconate. In her presentation on April 20, she said unity, friendship and charity are words easily associated with women.

“Think of the women you know. Think of your circle of friends. What comes to mind,” she asked them. After offering a long list of things they probably do Sister Diane said, “You can add more to that, I’m sure. I can see it in your eyes.”

“All of this working and serving brings about unity, not just in circles of friendliness, but in the church community,” she explained. “Women are, by nature, equipped to offer hospitality and a softer touch. Have you ever thought about the gifts you’ve been given?”

The world needs the compassion of women in the home, in the marketplace and in the church,” Sister Diane told them.

“The end result of sharing these gifts you may never see, but we both know that given in love, with the unity of the church and the service of all, that this sharing will lead not only to unity here, but unity with God in heaven,” she said.

While it’s easy to feel like “the invisible woman” sometimes, Sister Diane encouraged them to take heart from the example of those who built the great cathedrals of the world. The work often took more than 100 years — more than one person’s lifetime — and went uncredited to a great degree. The builders trusted that God sees everything, however, and continued to make the necessary sacrifices.

“Let’s pray that our work will stand as a foundation for the future,” she said.

To make certain the work will continue members of the Daughters of Isabella elected state officers to serve for the next two years. Installed for a second term as state regent was Sharon Hengehold of O’Reilly Circle No. 218. Assisting her as vice regent will be Lynn Engers of Belleville, Belleville Circle No. 329, and past state regent Evelyn Ribordy of Pontiac, Pontiac Circle No. 122.

Rounding out the roster are Stephanie Klingelsmith of Herrin, Msgr. DeGasperi Circle No. 959, and Joan Dittmer of Pontiac, Pontiac Circle No. 122.

Presiding at the installation was Lucille Reif of Plainville, Kan., one of two international directors of the Daughters of Isabella for the United States.