A Jesuit pope? Community has deep roots in Diocese of Peoria 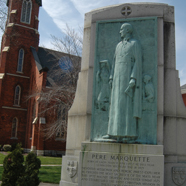 Photo Caption: This monument commemorating the Masses celebrated by Jesuit Father Jacques Marquette near Uitca in April 1675 stands at the corner of St. Mary’s Parish property in the LaSalle County community.

While the Holy Spirit seemed to take the world by surprise by asking Catholics to place their spiritual well-being in the hands of a Jesuit priest, people in what is now the Diocese of Peoria did that more than 200 years ago when Father Jacques Marquette celebrated the first Mass in Illinois near Utica.

“The earliest history of the faith in central Illinois came to us from French Jesuits,” said Msgr. Stanley Deptula, director of the diocesan Office of Divine Worship and liaison to the Diocesan Museum and the Archbishop Fulton J. Sheen Museum at the Spalding Pastoral Center in Peoria.

“It’s fascinating, as we celebrate our first Jesuit pope, to think of what we owe the Jesuits in central Illinois,” he said.

(EDITOR’S NOTE: Meet a current Jesuit from the Diocese of Peoria here.)

Msgr. Deptula noted that in addition to the pioneering efforts of Pere Marquette and his companion, Louis Jolliet, “there is a lengthy history of tremendously heroic Jesuits who traveled this whole area, preaching to the Indians, risking their own personal safety, sacrificing tremendously. Picture the incredible zeal of those priests.”

The stained glass windows of St. Mary’s Cathedral in Peoria can help with that.

Memorialized in the windows leading to the St. Thomas More Chapel are St. Isaac Jogues, St. Jean de Brebeuf and St. Rene Goupil. All Jesuit priests, they were the first officially recognized martyrs in North America.

Msgr. Deptula said the hands of St. Isaac Jogues were mutilated while he ministered to the Hurons in Quebec and he had to return to France to heal, but “he couldn’t wait to come back. He was so desirous to spread the faith. He came back and was eventually martyred.”

FIRST MASS COMMEMORATED
Those who are observant will also note that in the body of St. Mary’s Cathedral there is series of windows depicting the spread of the faith in the New World, and one of them commemorates the Mass famously celebrated near what is now Utica on Holy Thursday, April 11, 1675. According to historical accounts, there were 500 chiefs, 1,500 young men and hundreds of women and children in attendance.

Both liturgies are listed on a monument that sits at the entrance to St. Mary’s Parish property in Utica. Erected when Archbishop Joseph Schlarman was the Bishop of Peoria, it was unveiled by Cardinal Samuel Stritch of Chicago during a large outdoor liturgy on Oct. 14, 1951.

The Diocese of Peoria continues to honor his legacy and the debt owed to him by bestowing the Pere Marquette Award on volunteers throughout the diocese “in recognition of their effective leadership and tireless work.”

While other French Jesuits or “Black Robes” would follow him, their presence in central Illinois seems to diminish in the early 1700s, according to Msgr. Deptula.

“What I find fascinating is the continuity of these seeds of faith planted going on 350 years ago,” he said. “The first mission that Father Marquette establishes is not just dedicated to the mother of God, but in commemoration of Our Lady of the Immaculate Conception.

“Then you make the connection to our Jesuit pope, who now stands in an unbroken chain of succession back to St. Peter himself,” Msgr. Deptula said. “That awesomeness of the faith becomes clear when you learn the history of our faith.”