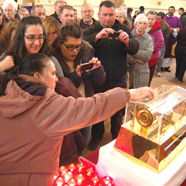 Photo Caption: Ambrosia Sanchez of St. Hyacinth’s Parish in LaSalle places her rosary atop a case holding a piece of the tibia (leg bone) of St. Mary Magdalene during veneration at the church on March 14.

LA SALLE — A dear friend of Jesus “visited” the Diocese of Peoria in mid-March.

A relic of St. Mary Magdalene drew large crowds — and long confessional lines — at several churches as it made its way through the diocese as part of a tour of Illinois.

“This is an immense blessing for our parish,” said Father Tony Dittmer, pastor of St. Hyacinth’s Parish in LaSalle, which hosted the relic throughout the day on March 14.

“I didn’t expect it would be a whole section of bone,” said Lana Peterlin, who came to an early morning Mass at St. Hyacinth’s to see the relic — a piece of the saint’s tibia (leg bone) several inches long. “It was very moving to be here.”

“We can just imagine it was on this bone that St. Mary Magdalene ran to tell St. Peter that Jesus had risen from the dead,” said Father Paul Carlson, parochial vicar, during a homily at the Mass that was attended by the student body of Trinity Catholic Academy in LaSalle.

Father Carlson told the students and dozens of adults present that “we are before the earthly remains of a friend of Jesus” who was “very brave.”

“She was even at the foot of the cross. When everyone else ran away and hid, she stayed,” said Father Carlson.

Throughout the day, area Catholics came to venerate the relic — placing objects such as holy cards or rosaries on the casing, and pausing to say prayers.

John Glynn of St. Hyacinth’s Parish paused a long while. He later told The Catholic Post he was praying for a friend’s sister-in-law who is undergoing treatment for breast cancer.

Deacon James Devine, a Missionary of the Most Holy Eucharist who is traveling with the relic — normally housed in a basilica in France — pointed to the long confessional lines and said St. Mary Magdalene always “draws people back to Jesus.”

Father Carlson said it was “especially exciting” the relic arrived the day after the election of Pope Francis.

The relic also was venerated at St. Mark’s, St. Philomena’s, and St. Mary’s Cathedral in Peoria, and at the Community of St. John in rural Princeville. The tour was coordinated by Paula Lawlor, author of “A Love Devout: the True Untold Story of Mary Magdalene.”