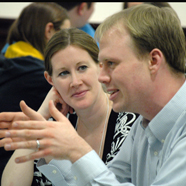 Photo Caption: Bob Kuener of St. Jude’s Parish in Peoria makes a point during a table discussion at the Faith-Based Leadership Seminar in Peoria on March 23. Looking on is his wife, Kristen.

The Weather Channel certainly influenced television meteorologist Marcus Bailey’s life. He admits he watched the network “way too much” as a child growing up in Indiana.

But the major guide in his life? That would be Bailey’s passionate, outspoken, faith-filled grandmother.

“We always liked to make her proud,” said WMBD-TV’s chief weather forecaster at the fourth annual Faith-Based Leadership Conference Seminar sponsored March 23 by the Diocese of Peoria’s Office of Evangelization. Bailey credits his grandmother for many influences, including keeping him rooted in the Catholic faith.

Likewise, Peoria Mayor Jim Ardis quoted former presidents, including Ronald Reagan and John F. Kennedy, during his presentation to the day’s 70 participants. But a favorite saying of his father has been a key touchstone in the mayor’s life, and is even inscribed on a plaque in his office: “Never judge a man until you walk a mile in his moccasins.”

While the meteorologist and the mayor have high-profile positions, their presentations reinforced that everyone is called to leadership. Within our families and circle of friends, at workplaces or schools and outside activities, there are daily opportunities to model behavior for others, make decisions, and take stands.

“Everybody’s a leader,” said Jack Desatnick, host of the day, in opening remarks at the Spalding Pastoral Center in Peoria. The annual event is designed to help integrate Catholic faith into our leadership, especially at the workplace. Desatnick defined faith-based leadership as “nothing more than empathy for everyone you come in contact with, and giving back to society.”

“We need more and more of that on every level,” said Bishop Daniel R. Jenky, CSC, who celebrated the event’s opening Mass. He added that Holy Week is a perfect time to “savor and study” the “mind-boggling” example of loving, servant leadership set by Jesus.

COMPASSIONATE, COURAGEOUS
Throughout the morning, faith-based leaders were described as both compassionate and courageous.

Mayor Ardis said we all experience moments when our faith is challenged, or something that someone says or does doesn’t seem right.

“We ask ‘Is this the time I should say something?’ If you are asking yourself that questions, the answer is ‘Yes.’ Say it. Make a stand,” said Ardis. “God will put the words in your mouth, I promise you,” he added. “You’ll say what needs to be said.”

Ardis stressed the importance of prayer, and thanked those who regularly pray for him. He also recalled the interdenominational “40 Days of Prayer” campaign he encouraged throughout the city at the start of 2008 to combat violent crime. Ardis acknowledged he “took a lot of criticism” for promoting the power of prayer, but said the campaign was effective on many levels, including that homicides dropped significantly that year.

The mayor applauded all who attended the seminar — including his own mother, Sue, whom he credited for laying the foundations of faith in his family of nine children. Others taking part were business, community, and parish leaders, as well as a group of students from the John Paul II Newman Center at Illinois State University.

Noting how government and cultural forces are “coming down on those of us in the Catholic faith on a daily basis,” Ardis said it is important that Catholic leaders unite and act “no matter what piece of the puzzle we’re in.”

“I’m an eternal optimist, but I think we’ve got some really rough times coming,” said Mayor Ardis, who especially thanked Bishop Jenky for his strong leadership.

WHEN THE DOOR OPENS
Both Ardis and Bailey said it was humbling and “out of their comfort zone” to address a crowd on the subject of faith.

“I’m used to talking to fourth-graders and telling them to go to the basement when there is severe weather,” said Bailey.

Bailey said he is the only Catholic among his station’s on-air personalities. But even though he said his station is fair in its religious reporting, Bailey acknowledged it can be difficult to be in a newsroom when there are negative stories on the church. He voices his opinion when necessary.

“When our faith is attacked or questioned, it’s an open door to teach what we strongly believe,” said Bailey. “They opened the door, and I’m going to walk through it. I can’t win everyone, but there are many willing to listen. You can eliminate some of the fog.”

Bailey said he tries to lead in a compassionate way “when I feel things are not right.”

“I lead by being an active participant in my church,” said Bailey, who is a lector, extraordinary minister of Holy Communion, and Annual Diocesan Appeal representative at Sacred Heart Parish in Peoria. His priorities have also changed now that he is married and has a 6-month-old daughter.
While he is on the air for three minutes at a time, “what I do for the other 24 hours is what should define me,” he said.

“Let’s get this out of the way,” he said to laughter. “This speech can only go up from here.”

Karlo Leonor is looking forward to those. A graduate of the University of Notre Dame, he recently moved to the area and is now employed at State Farm in Bloomington.

“How I integrate faith and work is very important to me,” said the new member of Epiphany Parish in Normal.