A national feather in the cap for St. Patrick’s School teacher 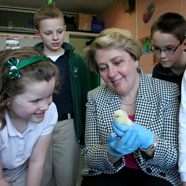 WASHINGTON — Walking into Kathy Schlack’s third grade classroom at St. Patrick’s School here is a breath of fresh air on a busy day.

The students are happy and friendly, sitting in learning pods that make peer tutoring possible. Their experiment to measure rocks and minerals on this particular afternoon is accompanied by the soft cheeping of the Leghorn chicks that hatched just a day or two before under the watchful eyes of the children.

Some would point to this all of this activity as evidence of why Schlack was selected to receive the 2013 Distinguished Teacher Award from the National Catholic Educational Association. She will be honored with teachers from the organization’s 11 other regions at a national convention in Houston next week, adding another feather to the cap of the 2012 Blue Ribbon School. (See related story on a national award to Msgr. Eric Powell below.)

Schlack prefers to think of it as passing on her own love for learning in a way that can bring everyone to the table.

“I always try to have three or four ways of doing something with the kids,” said Schlack, whose teaching degree from Illinois State University includes an emphasis on special education. “I don’t know if I see it as more of a challenge, but there has to be a way we can get through to the kids.”

For that reason she continually explores new programs and approaches to learning that will help the students at St. Patrick’s. “There has to be a better way to do something” seems to be her philosophy.

“Every school needs a Kathy Schlack,” said Dr. Sharon Weiss, superintendent of Catholic schools for the Diocese of Peoria and former principal at the Washington school.

“She continually re-creates who she is as a teacher and as a daughter of the church. If she attends a professional development conference and sees an idea or discovers a new best practice, it will be in her curriculum the next year,” Weiss said. “I am in awe of what she does and who she is. What a gift this talented teacher is to St. Patrick’s School and to the Catholic Diocese of Peoria!”

“Kathy finds great joy in teaching and makes her classroom very inviting with new adventures awaiting her students each school year,” current principal Doreen Shipman said of the veteran teacher. “She sets high standards for her students and works diligently to meet the differentiated needs of each one. . . . Her classroom and teaching style are truly about the students and facilitating the best education for them.”

“I JUST WANT TO HELP”
Schlack is quick to share the spotlight, however.

“As a faculty we’re very collaborative,” she said. “We’re always looking for new things to bring back to the school and we tweak them. . . . We adapt.”

Her academic goal is to make certain her students are on par with everybody else in Illinois — or better — so that they are ready to go on to fourth grade, no matter where life leads them. She also has a spiritual goal.

“I want them to be very sure of their Catholic value system, what’s right and what’s wrong,” Schlack told The Catholic Post. “In that same vein, I want them to know that God blessed each one of them with different gifts and to respect those differences.”

She’s able to integrate both through the annual unit with the Leghorn chicks. Working with the embryology program of the University of Illinois Extension Office of Tazewell County, she receives the eggs and tracks the development of the chicks before and after they hatch. In doing so the children get a lesson in science and the preciousness of all life.

“Without me getting into everything it’s right there in front of them — God put life in there,” Schlack said. “That’s the thing I can do here that I couldn’t do in public schools — express my faith and tell the kids, ‘Look what God created for us.'”

Even the chicks that are born with handicaps and won’t survive are handled and spend their short life on Schlack’s desk or in her hand. She reminds the children that “we all live in God’s hands.”

St. Patrick’s has been part of Schlack’s life since she was a fourth-grader there. She started teaching CCD when she was 14 and joined the faculty at the school 32 years ago. Her daughter, Adrienne, followed her into Catholic education and now teaches kindergarten, working in the same building as her mother.

Humbled by the NCEA award, Schlack said there are many fabulous teachers on her own faculty and throughout the Diocese of Peoria.

“I’m fine with doing this down in Houston because I’m proud of my diocese and I’m going to represent my diocese well,” she said. “But within my school . . . I just want to be there and help where I can.”

NORMAL — Joining representatives of the Diocese of Peoria at the National Catholic Educational Association convention in Houston next week will be Msgr. Eric Powell, pastor of Epiphany Parish here. He will be honored as a 2013 Distinguished Pastor by the organization. (A background story appeared in The Catholic Post, Jan. 20, 2013.

Msgr. Powell is credited with launching an academic improvement process at Epiphany School that resulted in higher test scores and Epiphany’s designation as a National Blue Ribbon School in 2011. The school also has a state-of-the-art pre-school, thanks to a building project he oversaw, and grade school classrooms are being renovated.

In addition, he co-teaches junior high religion classes and has created a “spiritual schedule” of activities for the school.

“Pastors offer spiritual leadership and vital support to the schools in their parishes, helping them succeed in their mission to educate students in an atmosphere of faith and academic excellence,” said Kathy Mears, executive director of the NCEA Department of Elementary Schools. “In honoring these individuals, we acknowledge the many pastors who provide outstanding support to Catholic education throughout the United States.”