8 local Knights of Columbus members to be honored April 13 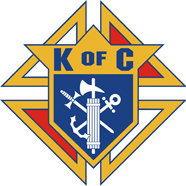 STREATOR — Eight members of the Knights of Columbus from around the Diocese of Peoria will be honored for outstanding service during the 25th annual “Night of Knights” Recognition Dinner on April 13.

The event, sponsored by the Peoria Diocese Chapter, recognizes members for longtime and/or exemplary dedication to the organization, the church, and their communities.

Serving as host for the 2013 dinner and ceremonies will be Msgr. George A. Dzuryo Council No. 790 of Streator. Four of this year’s honorees have ties to that council, while two are from Allouez Council No. 658 in Rock Island.

The evening begins with a 5:30 p.m. Mass at St. Michael the Archangel Church, 711 Lundy Street. A social period will follow at 6:30 p.m. at the Msgr. Dzuryo Council Clubhouse, 806 Oakley Ave. Dinner will be served at 7 p.m., with the program to follow.

Msgr. Brownsey is a 20-year member of the Knights of Columbus. He is chaplain for Guardian of the Redeemer Council No. 14870 at the Bradley University Newman Center.
Ordained in 1996, Msgr. Brownsey is pastor of St. Mark’s Parish, Peoria, and serves as director of vocations for the Diocese of Peoria and as director of the Bradley Newman Center.
His service to the diocese has included periods as parochial vicar of Sacred Heart Parish, Moline; assistant chaplain of Alleman High School, Rock Island; chaplain of Marquette High School, Ottawa; pastor of St. Mary’s, Utica, St. Peter’s, Peoria, and rector of St. Mary’s Cathedral, Peoria; and past service as associate vocations director and diocesan director of Cursillo/TEC.

Msgr. Halfacre is a 29-year member of the Knights of Columbus. He is Chaplain for his council and Faithful Friar for Streator Assembly #2109. Msgr. Halfacre was ordained a priest on May 25, 1991. Msgr. Halfacre is pastor at St. Michael the Archangel, Streator and St. Patrick’s, Seneca and serves as vicar forane of the Ottawa vicariate. Msgr. Halfacre is president of the pastor’s board of Marquette Academy, vice president of the Presbyteral Council of the Diocese of Peoria, and a member of the advisory board for the Annual Diocesan Appeal. His service to the diocese has included parochial vicar, St. Thomas, Peoria Heights (1991); pastor, St. Mary’s, Utica and chaplain, Marquette High School, Ottawa (1992); pastor, St. Patrick’s, Ottawa (1998); while remaining pastor, St. Patrick’s, Ottawa, to administrator, St. Mary’s (Naplate), Ottawa (2003); pastor, St. Michael the Archangel, Streator and part-time teacher at Marquette High School (2011).

A member for 62 years and past grand knight of his council, he is a member of the council’s Home Building Association and was instrumental in the land acquisition and building of the new council home in 1979. Blasco is a charter member of Streator Assembly No. 2109 where he served as faithful comptroller for 24 years.
He served as an usher at St. Stephen’s Parish for 25 years and was on the parish’s building committee. In the community, Blasco has been president of Streator Area United Way and received the ogranization’s Thomas Wilson Award. He has served on the Streator Junior Chamber of Commerce, Streator YMCA Board, Illinois Valley Community College Foundation, St. Mary’s Hospital Advisory Board, Streator Association of Commerce and Industry, and Engle Lane Theater Board.
He is a U.S. Air Force veteran, serving in World War II and the Korean conflict. He and his wife Rita have been married for 51 years and have four children.

A 70-year member of the Knights of Columbus, his wide variety of service has included assisting on the Heart of IL Fair concessions committee since its inception, fish fry team, steak fry team, hall and grounds crew, and bingo crew. In addition, Faley has been a volunteer for the council’s Intellectual Disability (Tootsie Roll) Drive throughout the council’s participation.
He is an active Fourth Degree and Honor Guard member.
At St. Bernard’s Parish over the course of more than five decades he has served as a lector, fill-in altar server, Cub Scout leader, and perennial “fish dipper” at the parish fish fries.
He earned the Illinois Governor’s Award for volunteer service at OSF Saint Francis Medical Center, and is also active in the American Legion, the VFW, and St. Patrick’s Society — volunteering at the Erin Feis each year.
He and his late wife, Maria, were married for 52 years and have seven children.

The current lecturer for his council who previously served as membership director — helping the council achieve Star Council status — Friedel is a 31-year member of the Knights of Columbus who has been recognized as his council’s Knight of the Year and Senior Knight of the Year. He has chaired council activities including the annual Columbus Day Dinner, coffee and conversation events, and the council’s involvement with the parish festival.
Friedel is active at St. Pius X Parish, where he sings in the adult choir and funeral choir. He is a perpetual adoration volunteer.
In the community, he has been a Salvation Army bell ringer and a multiple gallon blood donor. Friedel is a former Kiwanis member, a volunteer for the Community Wild Life Abatement group, and served eight years in the military.
He and his wife Marlene have been married for 47 years and have two children.

A past grand knight who has been serving as recorder for his council for six years, Lovell is a 22-year member of the Knights of Columbus. He organized the council’s 100th anniversary celebration, has co-chaired its Intellectual Disabilities drive, handles the purchasing of materials and supplies for fish fries, and coordinates Fourth Degree activities at St. Patrick’s Parish. He is a former District Deputy and star district award winner.
Lovell is an extraordinary minister of Holy Communion at St. Patrick’s Parish and has assisted the parish as a cluster committee member and on the Cemetery Board. He helps with parish grounds and building maintenance projects, landscaping projects, and trains the parish janitor.
A veteran of the U.S. Air Force who is a member of the VFW Men’s Auxiliary and the American Legion, he also assists with Harvest Days grounds and properties and coordinated the Dwight tornado relief benefit.
He has been married to his wife Linda for 38 years and they have three children.

In his 30 years with the Knights Pedelty has held offices including grand knight, faithful navigator, and secretary to the master of the Southern District. He has assisted his council as a bingo worker for three decades and has chaired the Fourth Sunday bingo for 25 years. A ticket chairman of the firecracker festival who has also worked on the Intellectual Disabilities drive for 20 years, Pedelty is a recipient of the Master’s Medallion from the master of the Southern District.
At St. Michael the Archangel Parish he is an extraordinary minister of Holy Communion and volunteers for church cleaning and other projects. He is a former president of the St. Stephen’s Parents Club and served as candy sale chair and fall festival chair. Active with his local union, he has assisted with Dollars for Diabetes and Labor of Love.
He and his wife Sherry have been married for 35 years and have two children.

Glenn A. Wells
Allouez Council No. 658, Rock Island
A past grand knight who helped lead his council to Star Council status and the Illinois Gold Medal, Wells has initiated several council activities including involvement in the annual golf classic’s Birdies for Charity fundraiser and the council’s Coats for Kids program. A 36-year member, he has been recognized by his council as Senior Knight of the Year and is a former captain of the local Fourth Degree Assembly and Honor Guard member.
At St. Pius X Parish, he serves as an extraordinary minister of Holy Communion and is a perpetual adoration participant.
In the community, he volunteers for CASI (adult social & recreational non-profit), does data input for the American Red Cross at the annual golf classic, is a bell ringer for the Salvation Army, organized a Habitat for Humanity Cycle of Hope breakfast, is a past president and major project coordinator for the Exchange Club. He is also an 18-gallon blood donor, and has received the John Deere Classic Volunteer Recognition Award.
He and his wife Mary have been married for 55 years and have six children.