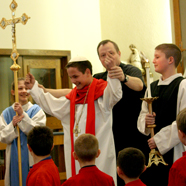 Photo Caption: Father Don Roszkowski, pastor of St. Mary’s Parish in Metamora, lifts the arms of Alexander Rousch who was elected “pope” during a mock conclave held at the school on March 13.

METAMORA — Just hours before Pope Francis appeared on the balcony of St. Peter’s Basilica in Rome to be welcomed by a waiting world, the students at St. Mary’s School here rejoiced as their own “pope” emerged from the sacristy of the church to stand before them.

Seemingly as shy as the former Cardinal Jorge Mario Bergoglio, “Pope Alexander” Rousch didn’t look up as the student body cheered his “election.” Even when Father Don Roszkowski, pastor, walked behind the seventh-grader and lifted his arms into the traditional gesture of greeting, Pope Alexander only peeked up at those gathered before him and gave a little smile.

Then again, he only had 30 minutes from the start of the “general congregations” with his fellow “cardinals” in the church balcony until he was vested at the end of the “conclave” to take in what was happening.

“I think the kids responded well and the hands-on learning, even in the simplified version, helps them to see the glory of the church,” Father Roszkowski told The Catholic Post.

“Kids hear about it, but unless their parents discuss it at home I don’t know that they really get the enormity and the gravity of what a big decision it is and how it can affect the future of the Catholic Church,” said Jim Dansart, principal.

“I think the reenactment was fun and allowed them to really experience — on a very small scale — how it happens,” he said.

TWO BALLOTS
Father Roszkowski got the idea for the mock conclave by listening to Eternal Word Television Network. EWTN had run a story about another school that had done something and a priest-friend encouraged him to try it at St. Mary’s.

The names of two boys from each grade, second through eighth, were randomly drawn to serve as the conclave’s cardinals.

As the oldest students in the school, the eighth-graders were ineligible to vote. They were, however, allowed to participate in a brief “general congregation” in which the 14 cardinals were asked to come up with two or three things that would make a good pope for St. Mary’s School, Father Roszkowski said.

After processing into the cry room, each of the junior cardinals stood before the Bible and took an oath of secrecy. After everyone who would not vote was asked to leave the room, the voting started.

Just as the cardinals were doing in Rome, each class representative wrote the name of a candidate on a ballot and came forward to place it in a ciborium. Three of the cardinals did the counting.

The first ballot produced “black smoke” — a piece of paper with black swirls was taped to the window in the door. Pope Alexander emerged after the second ballot.

While the lesson took all of 30 minutes, Father Roszkowski said he laid the groundwork with the students after Pope Benedict XVI resigned.

“I gave an explanation for how we elect a pope and the seriousness of that position,” he said. “I told them it’s such a hefty calling of the Lord to be able to be the Vicar of Christ on earth — you’re in charge of 1.5 billion Catholics around the world. The weight of it is not something that someone wants, but a divine call from God.”