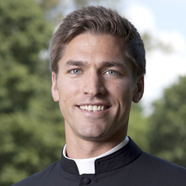 Photo Caption: Diocese of Peoria seminarian Chase Hilgenbrinck says that responding to God’s call to change in our lives can cause anxiety, but also leads to “the best version” of ourselves.

EDITOR’S NOTE: Chase Hilgenbrinck made headlines when he left behind a promising career as a professional soccer player in 2008 to study for the priesthood. Now preparing for ordination to the transitional diaconate in May, he shares a bit more of his discernment process with readers of The Catholic Post.

The son of Mike and Kim Hilgenbrinck, he attended Holy Trinity School in Bloomington and University High School in Normal. He would go on to play soccer for four years at Clemson University, graduating with a degree in Spanish and International Trade in 2004.

After four seasons in Chile, he returned to the United States and Major League Soccer. Hilgenbrinck was playing for New England Revolution when he asked to be released so he could enter Mount St. Mary’s Seminary in Emmitsburg, Md.

Catholics do not like change. I’m Catholic. We get anxious about the idea of a new pope, a new Mass translation, when our priests move, or even when the plants get moved around in the sanctuary. Somehow, each of these changes affects the way we worship and experience the church.

I suspect, however, that our greatest anxiety in the face of change is that we are confronted with the reality that we, ourselves, must change.

My anxiety was no different nearly five years ago when I walked off the professional soccer field for the last time and entered the seminary, realizing that my days of sitting in the pews were numbered because I would soon be standing on the other side of the altar. It is an understatement to say that my response to God’s call changed the way that I prayed and experienced the Mass, but even more jarring for me was the reality that I must change.

Many of my friends wondered why God would “take soccer away from me” and what I would do without it. I continue to remind them that our Lord does not renege on the gifts that he has given us, but He might ask us to use them in a different way. Instead of being a role player on a team, I now coach, manage, and captain our seminary soccer team, which plays in an annual tournament against other seminaries on the East Coast; I serve as the team chaplain for the Mount St. Mary’s Division One Men’s Soccer Team; and I am often asked to give talks to young athletes about the complementary nature of sports and faith.

The way that I view the game has changed, I have changed, and our Lord knew I needed it.

TRANSFORMATION IN CHRIST
Others are more curious about the transition from the pew to the altar. Apart from six years of study and formation in the seminary, one does not become a good priest unless he sees it done well. I could not have had better training from the summers I spent with various priests of our diocese, witnessing the diverse demands of their particular assignments.

I was blessed to spend my first summer parish assignment in LaSalle, getting a taste of the very historic and ethnic churches of St. Hyacinth’s, St Patrick’s, and Queen of the Holy Rosary Shrine. I also witnessed the profound goodness of priestly fraternity while living with Father Robert Rayson and Father Adam Stimpson.

I spent another summer at St. Jude’s on the north side of Peoria, experiencing a very young, vibrant, and rapidly growing parish. I was fortunate to see the beginnings of a building project, as Father Patrick Hennehan was preparing to build a new school. I also received insights into high school chaplaincy from Father Paul Carlson, who was assigned to Peoria Notre Dame.

Last year, I came to know the beautiful simplicity, faithfulness, and warmth of our rural parishes when I spent the summer in Monmouth, serving at Immaculate Conception Parish, St Patrick’s in Raritan, and St. Theresa’s in Alexis. I was blessed to witness the realities of a newly ordained priest’s first day — and first two months — on the job, as well as experience the transition of a priest’s move, as I helped Father Tim Hepner and Msgr. Tom Mack unpack their bags and get acquainted with their new flock.

Moreover, in my yearlong pastoral assignments at the seminary, I have helped to prepare children for confirmation, taught high school theology and taught RCIA in a prison. I currently work for an immigration lawyer at Catholic Charities in Washington, D.C.

When I recall all of these experiences, I wonder, “How could I not have changed?” In fact, my anxieties about “change” subsided once I realized that small changes are only a means for transformation in Christ. Transformation reveals the purpose for what might otherwise be regarded as arbitrary changes.

I must continually change so that I can become the best version of myself and be transformed into a priest of Jesus Christ. How blessed I am that I belong to a church that encourages and facilitates my transformation as a man so that I may become the best priest that I can be for the people that I will serve in the Peoria Diocese.