Vocations: All roads lead to Franciscans for postulant 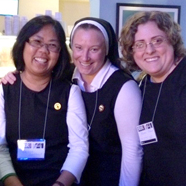 WEST PEORIA — Darlene Santibout knows what it means to be on a journey.

When she was 10 years old, she emigrated from Laos to the United States with her mother and two sisters, eventually settling in California.

Raised as a Buddhist, she went through the RCIA process and was baptized in the Catholic Church at the Easter Vigil in 2001.

And after exploring several different religious communities in California and the Midwest to discover how God was calling her to serve him and his people, she entered the Sisters of St. Francis of the Immaculate Conception last October.

“When I was baptized I longed to learn more about and have a relationship with God. That’s what I seek, to have that relationship,” she recently told The Catholic Post.

“I feel I can have a deeper relationship with him now and I’m sure that’s going to grow,” Santibout said. “I just feel like I’m in love.”

In fact, she described her discernment process with the community — also known as the Heading Avenue Franciscans — as a courtship, with each getting to know the other. One way she did that was living at St. Joseph’s Home in Springfield and working with the Franciscans there.

“I felt very blessed while I was there. I was open to whatever He wanted me to do,” Santibout said.

“Does He want me to do dishes in the dish room? That’s fine. Is it visiting the residents? That’s fine, too. I’m not sure I can do dishes all the time, though,” she admitted with a laugh.

“It was an opportunity to learn about myself, what I can do, what my talent is and where God wants me,” she said.

LIVING THE LIFE
There will be many more opportunities for her to do that during her postulancy, which will last from six months to a year, according to Sister Irene Fritch, OSF, director of formation. That includes learning more about the Catholic faith, studying the Catechism of the Catholic Church, and becoming familiarized with the morning and evening prayers of the Divine Office.

Santibout has started to share the life of the Heading Avenue Franciscans through that prayer, meals, and work. For example, she has helped Sister Sarah Elizabeth Roy, OSF, vocation director, at various events, talked to the students at St. Vincent de Paul School in Peoria about vocations during Catholic Schools Week, and volunteers with the sandwich program at Sophia’s Offerings from Angels Kitchen at St. Joseph’s Church in Peoria.

“It’s the experience of living the life so you get to know what this is and what you’ll be doing,” Sister Irene said.

Santibout became interested in consecrated life when she encountered a Sister during the RCIA process. She was fascinated and started searching the Internet for more information.

Noting that many of the communities invited interested women to “Come and see,” she decided to do just that and found “every time I’d go I’d feel at peace. I wasn’t sure what a ‘calling’ was. All I knew is I liked to go visit the Sisters. I was happy.”

Eventually Santibout narrowed down her search to Franciscan communities and visited three in Illinois in 2011. It soon became clear that with the Heading Avenue Franciscans she was at home.

“I just felt like I was myself. I wasn’t trying to be anyone else — I can be myself and be comfortable,” she told The Post. When she found work in central Illinois that would allow her to continue her journey with the Franciscan community as an affiliate and pay down her remaining bills, she took it as an affirmation from God that she was on the right track and things have just continued to click for her.

“This is the happiest I’ve ever been,” Santibout said, looking back on her journey. “This is where God wants me to be at this time.”