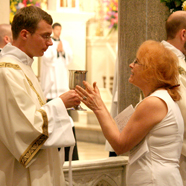 Photo Caption: Deacon Scott Potthoff administers Communion to Chris Ozuna-Thornton of Chillicothe, who has prayed for him throughout his studies for the priesthood.

By: By Deacon Scott Potthoff

EDITOR’S NOTE: The following reflection was written by Deacon Scott Potthoff, who is completing his fourth year of theology studies at Mount St. Mary’s Seminary in Emmitsburg, Md. The son of Steve and Diana Potthoff of Spring Valley, he graduated from St. Bede Academy in Peru in 2005 and earned a bachelor’s degree in philosophy from Immaculate Heart of Mary Seminary in 2009.

During his summer vacations from the seminary, he has served as staff for Emmaus Days, which had a great influence on his own decision to study for the priesthood, and at St. Pius X in Rock Island, Holy Trinity in Bloomington, and St. Columba’s in Ottawa.

Deacon Potthoff is preparing to be ordained a priest of the Diocese of Peoria this May.

I grew up near Spring Valley and attended St. Benedict’s Parish in Ladd with my family. We were faithful and I received solid religious instruction. I first thought God might be calling me to the priesthood after I started serving at Mass in fourth grade. It felt like a tug at my heart. I initially ran from these thoughts, but the more I resisted the more they came up.

Eventually I told my pastor, Father Harold Datzman, OSB, about these thoughts and he told me about a camp that the seminarians of the Diocese of Peoria run called Emmaus Days. There I hung out with other boys my age, but also learned that God calls all of us to be holy, each in our own way. I also learned that God shows us our particular calling in prayer.

At Emmaus Days I met seminarians for the first time, young men who were seriously asking the Lord if the priesthood was their way to be holy. I was also attracted by the infectious joy of the priests I met there and thought, “Maybe this priesthood thing isn’t so bad after all.”

In high school I faded away from the Lord, but the Lord brought me back to Himself even more strongly through Teens Encounter Christ. Through TEC I went from knowing about God to taking the big step of really getting to know Jesus Himself in the encounter of prayer.

After TEC my attitude and lifestyle started to change. I realized that I say I’m a disciple of Jesus, and if this is what I want then there are certain things I have to do and certain things that I can’t do. I began to really pray from the heart with Scripture, and became more honest in my relationships.

“COME WITH ME”
During my last semester of high school I came to a moment of crisis. While praying the rosary during Lent I realized that I did not, in fact, have any idea where God was calling me. I thought it might be religious life and that was what I was pursuing, but I had neglected to ask God what He wanted me to do and to listen for a response.

I needed to take a step back, so I decided to take a year off to go to the local community college. But early that summer I went to Emmaus Days again, really feeling a need to be alone with the Lord so that He could guide me. Surrounded by good Catholic men, the Lord invited me to “Come with me for a year.” I said, “OK, I can do a year.” I contacted one of those joyful priests, Msgr. Brian Brownsey, and was accepted as a seminarian for the Diocese of Peoria.

The seminary has been an excellent environment to test my vocation, to develop a prayer life where I could wait to hear the Lord more clearly. It is not just about what natural gifts a man has, but the Lord’s calling. If He wants a man to be a priest He will give him all he needs.

Our God is faithful and amid ups and downs He has made me come alive in these eight years of seminary, giving me peace, confidence, and joy in following His call. But first I needed to give Him time in prayer, to meet Him and to hear His call.

As I look toward priestly ordination I am excited to join Bishop Jenky and the priests of the Diocese of Peoria in serving the good people here, and to help others encounter the Lord Jesus Christ through prayer, the sacrament of penance, and especially in the Holy Eucharist. God calls us all to be holy. In prayer we find how God is calling us to be holy, and as Bishop Jenky’s episcopal motto teaches us, “His will is our peace.”