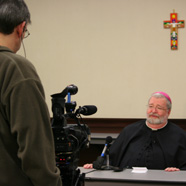 Like the rest of the world, Bishop Daniel R. Jenky, CSC, was still getting to know Pope Francis when he spoke to the media a few moments after the new pontiff prayed with the people who filled St. Peter’s Square on March 13. That didn’t lessen his joy at having a new “papa,” however.

“The whole church has been praying that the Holy Spirit would guide the cardinals. For somebody like me, it’s a moment when God has spoken through those cardinals,” said Bishop Jenky, who called himself “a true Catholic believer.”

“It has seemed so odd praying the Mass and not saying the name of the pope,” he told The Catholic Post. “It will be good to pray at Mass tomorrow for Francis, our pope.”

The bishop, who had met with Pope Emeritus Benedict on more than one occasion, confessed that he shed a tear or two when the doors of the papal retreat at Castel Gondolfo closed on Feb. 28, marking the end of his eight-year pontificate.

The election of Cardinal Jorge Mario Bergoglio of Argentina is another sign of the continuity that has been a hallmark of the Catholic Church throughout the centuries, according to Bishop Jenky.

“He must be extraordinary,” the bishop said of the new pope.

“The only way anyone assumes a job like that is an act of faith,” he explained. “I’m sure this man lives by faith and things you don’t think you can do you do because of the grace of God.”

“AT THE FOOT OF THE CROSS”
Noting that Pope Francis is a member of the Society of Jesus, he pointed to the spiritual exercises of St. Ignatius of Loyola, which provide a foundation for the life and prayer of the religious community.

“The first exercise is to picture yourself at the foot of the cross,” Bishop Jenky said. “I’m sure that’s something this man has prayed every day, asking himself, ‘Who is Jesus, what does this say about him, and who am I?'”

In doing so, Pope Francis would have bound himself to Jesus ever more firmly, as St. Ignatius always urged his followers, who are called Jesuits. Pope Francis is the first member of that community to serve as the Holy Father.

Bishop Jenky said the best thing Catholics can do for their new “papa” is what he asked when he appeared on the balcony of St. Peter’s Basilica for the first time.

“Pray for him,” the bishop said simply, adding that he intends to do just that. “Long live the pope.”

Habemus papam! We have a Pope!

The Diocese of Peoria joins with the Church throughout the world in offering thanks to God for raising up a new shepherd for the Catholic Church. To our chief Pastor, we pledge our respect, obedience and love. I encourage all Catholics and people of faith to pray for Pope Francis as he takes up this pastoral office as the Bishop of Rome.

Like all of you, I am hearing from the media that Pope Francis is known for his simplicity, holiness and charity.