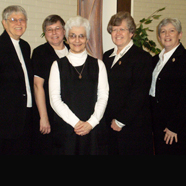 WEST PEORIA — The Sisters of St. Francis of the Immaculate Conception have elected Sister Paula Vasquez, OSF, to a second four-year term as president. Installation ceremonies are scheduled for Sunday, June 2.

Bishop Daniel R. Jenky, CSC, celebrated the Mass of the Holy Spirit and then presided at the election, which was held in the chapel of Immaculate Conception Convent, 2408 W. Heading Ave.

The daughter of Tecla and the late Thomas Vasquez of Holy Family Parish in Oglesby, Sister Paula entered the Franciscan community in 1965. She has a bachelor’s degree from Bradley University in Peoria and a master’s degree from Cardinal Stritch University in Milwaukee.

In addition to teaching at three Catholic schools in central Illinois, Sister Paula was principal at Seton Catholic School in Moline from 1982 to 2002. She has served as director of formation of women entering the Heading Avenue Franciscans, as well as vice president of the community and facility director of the motherhouse.

She was elected president in 2009.

Founded in 1891, the Heading Avenue Franciscans have called West Peoria their home since 1912. Today there are 35 members serving the Dioceses of Peoria and Springfield in ministries that include prayer, care of the elderly, campus ministry, adult literacy, pastoral care, education, spirituality and work in diocesan offices.