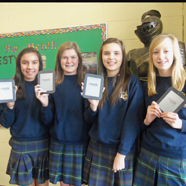 For Mike Lootens, principal, the “cool thing” is that the giving nature of the girls continued even after the charity contest they entered leading to his visit had ended.

On March 9, shrieks of joy were heard throughout the school when the girls learned via a Skype conversation with the New York-based Pencils of Promise organization that Epiphany School had been selected for the visit.

The Epiphany girls — plus friend Christine Travis of Chiddix Junior High — have been a fundraising force over the past several months, collecting more than $21,000 to help build schools in high-need countries such as Nicaragua, Guatemala, and Laos. For every $25 they raised, they earned one ticket for a drawing to have Bieber, a spokesperson for Pencils of Promise, visit their school.

The sum was the third highest raised by any group nationally, earning them at least two plane tickets to the school Bieber would visit.

Before Monday’s announcement, the girls had decided that since they all couldn’t go, they would donate the tickets to help raise funds for St. Jude Children’s Research Hospital.

Now, the global music superstar is coming to them.

And when that happens — the date has yet to be determined — it will be a big deal, said Lootens, adding that Bieber will supply his own security.

Only 19 years old, the Canadian-born singer and actor already has more than a dozen top hits and 33 million followers on Twitter. While the school visit is not a concert, he might break into a spontaneous song or two, as he reportedly did while visiting last year’s winning school.

Meanwhile, Lootens and contest sponsors are singing the praises of the charity-minded girls and the school community.

“Thank you so much for all of your hard work and congratulations to you and all of your schoolmates,” said Pencils of Promise founder Adam Braun in making the “massive announcement” via Clever TV on March 11. The contest raised enough money to build 12 new schools, he said.