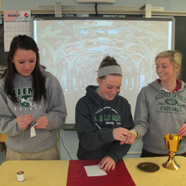 Photo Caption: Brittany Pearson strings ballots together with needle and thread as Allison Dussliere and Martinelli Holmes count the votes during a mock conclave at Alleman High School in Rock Island on March 6.

ROCK ISLAND — If Alleman High School history repeats itself, Cardinal Peter Turkson of Ghana has an inside track to be the next pope.

Less than a week before the College of Cardinals opened their conclave in the Sistine Chapel, students in Roxanne Miner’s five church history classes at Alleman cast their own ballots.

And the results of the mock conclaves, conducted March 6 after a study of the process and research of the College of Cardinals by the Alleman juniors, reflect the widespread belief that there are many directions the real vote in Rome could go in electing the next pope.

According to Miner, two classes elected Cardinal Turkson — head of the Pontifical Council for Justice and Peace since 2009 and the former archbishop of Cape Coast, Ghana. One election was on the second ballot and the other on the third ballot.

In 2005, when Alleman’s regularly scheduled study of the conclave process also was perfectly timed with real historical events on the world stage, two of Miner’s classes selected Cardinal Joseph Ratzinger, who was elected and became Pope Benedict XVI.

“We had two days of discussion leading up to the mock conclave,” said Miner of this year’s process. With a screen backdrop of the Sistine Chapel, the students came forward to place their votes in a chalice.

Meanwhile, it took four ballots for another class to finally elect French Cardinal Jean-Louis Tauran, 69, president of the Pontifical Council for Interreligious Dialogue. Interestingly, he is the “proto-deacon” of the College of Cardinals and would be the one, at the end of the real conclave, to announce to the world, “Habemus papam” (“We have a pope”).