Recently released films reviewed on the basis of moral suitability 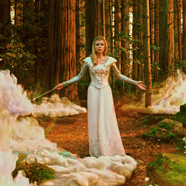 Photo Caption: Michelle Williams stars in a scene from the movie “Oz the Great and Powerful.” The Catholic News Service classification is A-II — adults and adolescents.

The following movie reviews are supplied by Catholic News Service in conjunction with the United States Conference of Catholic Bishops’ Office of Film and Broadcasting.

For full reviews of these films, as well as earlier releases, visit the CNS movie site at www.catholicnews.com/movies.htm.

This list will be updated regularly, and all reviews are copyright (c) 2013 Catholic News Service/U.S. Conference of Catholic Bishops.

“Oz the Great and Powerful” (Disney)

Lush visuals and sly humor boost this 3-D prequel to the 1939 classic “The Wizard of Oz” — based, like its predecessor, on the writings of L. Frank Baum.
A small-time carnival magician (James Franco) finds his life transformed when a Kansas tornado transports him to the magical Land of Oz. There, he discovers that both his arrival and his eventual victory over the forces of darkness gripping the realm have been prophesied. But self-doubt — together with his initial inability to determine which of his new homeland’s three presiding witches (Mila Kunis, Rachel Weisz and Michelle Williams) embodies goodness — pose stumbling blocks on the way to his promised destiny.
Director Sam Raimi’s fantasy adventure emphasizes confidence, cooperation, the marvels of science and a generalized faith in happy endings, though his protagonist is shown praying to God in times of need.
More problematic is the fact that several plot points turn on the wizard’s womanizing. While the specifics are omitted, the subject matter is unsuitable for small moviegoers, who might also be frightened by some of the spooky creatures jumping out at them from the screen.
Mature references, perilous situations, a couple of mild oaths, potentially upsetting images.

Seeking revenge for the gangland killing that claimed his family, a brooding lug (Colin Farrell) lures the underworld kingpin responsible (Terrence Howard) into a trap by serving him as a loyal assassin, thereby gaining the gangster’s confidence. Along the way, the victim-turned-hired-gun falls for his neighbor (Noomi Rapace) who’s out for payback of her own via blackmail.
The labyrinthine — and bloodthirsty — game of cat and mouse that ensues, under Niels Arden Oplev’s direction, is further warped by skewed moral values. A benign view of revenge, pervasive gory violence, including gunplay and torture, a nongraphic bedroom scene with brief rear nudity, relentless profane and rough language.

Fun fable in which the newfound romance between an absent-minded yet courageous peasant boy (Nicholas Hoult) and a plucky princess (Eleanor Tomlinson) is imperiled when a beanstalk of his own unwitting creation suddenly sprouts up, carrying her aloft to a land of aggressive, people-eating giants (their animated leader voiced by Bill Nighy).
On the perilous mission to rescue her, the lad gains the patronage of a chivalrous nobleman (Ewan McGregor) but incurs the displeasure of a conniving official (Stanley Tucci) of the king’s (Ian McShane) court. Director Bryan Singer’s faith-tinged 3-D retelling of the classic fairy tale — into which screenwriters Christopher McQuarrie and Dan Studney blend elements of the related story “Jack and the Beanstalk” — is set in an alternate version of the Middle Ages where monks and other characters freely, if only incidentally, acknowledge God. Still, the gruesome fates awaiting various bad guys, together with a touch of salty language, make this unsuitable for the smallest members of its source material’s original audience.
Scenes of bloodless but potentially disturbing violence, brief references to the occult, some mildly scatological humor, a couple of crass terms.

This gross-out comedy written and directed by Jon Lucas and Scott Moore follows in the wayward footsteps of their 2009 film, “The Hangover,” and its 2011 sequel. A straitlaced college student (Justin Chon) has reached the landmark birthday of the title, and his two best friends (Miles Teller, Skylar Astin) arrive on campus determined to show him a good time. Facing a crucial medical school interview in the morning, he initially resolves to stay home. But his pals promise he’ll be fit for the appointment. What follows is a nightlong odyssey that manages to offend all of the senses, including that of decency. Semi-graphic sexual activity, some of it deviant, masturbation, full nudity, drug use, alcohol abuse, pervasive obscene and scatological humor, relentless profane and rough language.

Writer-director Todd Robinson’s speculative thriller plays off a real-life Cold War incident in which — for reasons that have never been fully explained — a nuclear-armed Soviet submarine sank in the Pacific in 1968. Here the vessel has an honorable but troubled commander (Ed Harris) who comes into conflict with a KGB operative (David Duchovny) on board after he discovers that the agent is bent on a high-stakes clandestine mission that may or may not have been sanctioned by Moscow.
Though it feels at times like a warmed-over version of 1990’s “The Hunt for Red October,” this fairly routine military exercise does explore the nature of heroism and sporadically showcases the captain’s frayed but enduring ties to the Russian Orthodox faith.
Some gory violence and intense gunplay, a suicide, fleeting semi-graphic sexual activity, a couple of uses of profanity, at least one rough term, occasional crude and crass language.

This low-budget sequel to 2010’s “The Last Exorcism” finds the haunted heroine of the original (Ashley Bell) running around New Orleans trying to escape the demon who once possessed her — and who is now in love with her.
Director Ed Gass-Donnelly, who co-wrote the screenplay with Damien Chazelle, saves the big effects for the end. So, for nearly an hour, the main character just wanders around or goes about her job while spooky music plays.
Confused treatment of religion, fleeting sexual imagery, mild gore, a couple of uses of profanity.

Restrained, but not overly original thriller in which a series of disturbing events beset an ordinary couple (Keri Russell and Josh Hamilton) and their sons: one a teen (Dakota Goyo), the other a 6-year-old (Kadan Rockett). The eventual explanation — provided in part by a reclusive conspiracy theorist (J.K. Simmons) — indicates that the family has unwittingly drawn the attention of some highly unusual, and potentially dangerous, visitors. Writer-director Scott Stewart works into his script the pro-family notion that clan discord — under economic pressure, Mom and Dad have been quarreling — assists dark forces. But he also shows us some adolescent experimentation with drugs, pornography and other forms of sexuality that make his eerie offering unsuitable for kids.
Fleeting gore, brief scenes of sensuality, some involving teens, nongraphic marital lovemaking, a couple of uses of profanity, a smattering of crude and crass language.

With his naive son (Rafi Gavron) facing a mandatory 10 years in prison for dabbling in the drug trade, a successful trucking executive (Dwayne Johnson) makes a deal with the federal prosecutor (Susan Sarandon) on the case: If he can infiltrate a local narcotics cartel and garner sufficient evidence to convict its boss (Michael K. Williams), she’ll reduce the lad’s sentence.
Director and co-writer Ric Roman Waugh enhances his fact-based action outing with human drama and social commentary. Though the latter element gives rise to some clunky dialogue, the overall result is both suspenseful and morally rich.
Much stylized and some graphic violence, including gunplay and a beating, mature themes, about a half-dozen uses of profanity, considerable crude and crass language.

This animated adventure for children, helmed and co-written by Callan Brunker, is goodhearted but only moderately entertaining. To the blue-skinned inhabitants of Planet Baab (pronounced “Bob”), the film’s initial setting, Earth is known as the mysterious and frightening “Dark Planet.” So, when his heroic but dimwitted astronaut brother (voice of Brendan Fraser) undertakes a voyage there, only to be taken prisoner by a gung-ho Air Force general (voiced by William Shatner), a nerdy space engineer (voice of Rob Corddry) feels compelled to follow and rescue him, despite their long-standing rivalry.
Family solidarity is showcased not only through the siblings’ eventual teamwork, but through the scientist’s bonds with his loving wife (voice of Sarah Jessica Parker) and plucky young son (voiced by Jonathan Morgan Heit). Some jokes in Brunker and Bob Barlen’s script may strike adult viewers as broadly anti-military, rather than simply anti-militaristic. Parents will also note passing instances of mild potty humor and a scene of implied comic nudity. Much cartoon violence.

A restless teen (Alden Ehrenreich) in rural South Carolina finds his stultifying world transformed when he falls for the new girl in town (Alice Englert), who turns out to be a witch. But their relationship draws the opposition of her warlock uncle and guardian (Jeremy Irons) and places them at risk due to the schemes of her spell-casting mother (Emma Thompson).
A mixed religious outlook — white evangelical Christians are mercilessly caricatured while the burgh’s African-American librarian (Viola Davis) blithely combines her role as a custodian of conjuring lore with faithful church attendance — makes the occult elements underlying writer-director Richard LaGravenese’s screen version of Kami Garcia and Margaret Stohl’s 2009 novel more troubling than they might otherwise seem.
Few in the targeted audience of teen date movie consumers are likely to possess the discernment necessary to bring all this into proper focus. An ambivalent portrayal of Christianity, brief sacrilegious behavior, restrained scenes of violence with fleeting gore, semi-graphic nonmarital sexual activity, at least one use of profanity, some crude and crass language.