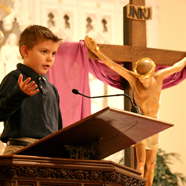 Photo Caption: A student from Visitation School in Kewanee leads the psalm at a Mass in Thanksgiving for the ministry of Pope Benedict XVI.

KEWANEE — As Pope Benedict XVI was preparing to retire and begin what he called “the last stage of his pilgrimage on this earth,” the children of Visitation Catholic School joined their voices to a chorus of thanks from around the world and pledged to pray for the only Holy Father many of them had ever known.

“The students and faculty are so excited that they’re living the history that they study about the church,” principal Elizabeth Blachinsky told The Catholic Post after an all-school Mass on Feb. 28.

“We’ve been sharing memories of how we remember when the white smoke would come from the chimney,” she said. “Children have been talking with their parents. It’s just become a big history lesson. It’s a wonderful opportunity to be part of this and to understand it.”

School Masses at Visitation generally take place on Wednesdays. Father Anthony Bernas, parish administrator, asked if this week’s liturgy could be moved to Thursday, however, so the children, faculty and staff could mark Pope Benedict XVI’s retirement and ask the Holy Spirit to guide the College of Cardinals in choosing his successor.

Father Anthony noted that the man known as Cardinal Joseph Ratzinger had been prepared to retire once before, after the death of Blessed Pope John Paul II in 2005.

“But the Holy Spirit, through the deliberation of (his) brother-cardinals, called him to further service in the church as the Bishop of Rome,” he told the students, and in submission to the will of God, Cardinal Ratzinger became Pope Benedict XVI.

By choosing to step down during Lent, Pope Benedict provided a powerful example of what it means to follow Christ on the road to Calvary, Father Anthony said.

“In our daily life we experience many moments — some small, others of great importance — in which we are invited, with the help of God’s grace, to let go of our own will and to do the will of God, trusting that it will lift us to a destiny far better than anything we could have planned for ourselves,” he explained. In Pope Benedict XVI, “God has given us a living image of Christ which can lift us up when we are tempted to cling to our own whims, desires and wills.”

Even though they won’t be able to see him in the same way, the students were assured that the retired pope would still be a vital part of our lives.

“Pope Benedict has promised to pray for us, imploring from God the grace each of us as individuals and as the church as a whole need to live out our faith and proclaim the Gospel more effectively in a new evangelization,” Father Anthony told his young listeners. He asked them to return the favor by thanking God for this “good and faithful servant.”

Blachinsky said the students would return to the church in small groups between 12:30 and 2:30 p.m. on Feb. 28 for eucharistic adoration and Benediction. They prayed one decade of the rosary for Pope Benedict and another decade for the cardinals who would be meeting in the conclave.