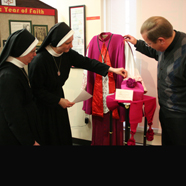 For some the Second Vatican Council is part of their lived experience. For others it is part of history. Both will find something to explore at “Vatican II and the Peoria Diocese,” a new exhibit at the Diocesan Museum at the Spalding Pastoral Center in Peoria.

“With the museum exhibit we’re trying to take this grand ecumenical council, this historic moment for the church, and make it real,” said Msgr. Stanley Deptula, who works with the diocesan archivists on the exhibits. “It goes behind the documents and behind history and gives a real human face to some of the characters.”

The Diocese of Peoria had several strong ties to the council, which started 50 years ago and over three years produced documents that touch every aspect of church life.

Bishop John B. Franz, who served the Diocese of Peoria from 1959 to 1971, attended all four sessions of the Second Vatican Council. Msgr. Deptula credited Franciscan Sisters of John the Baptist Lea Stefancova and Ann Gill with discovering “a real treasure trove” of personal letters Bishop Franz sent from Rome to Msgr. George A. Carton, chancellor.

“Some of them were very funny. Some were very poignant,” Msgr. Deptula said.

In one letter dated Oct. 26, 1962, Bishop Franz talks about the debate between those who favored retaining Latin in the liturgy and those who were championing use of the vernacular or language of each country.

“The Latinists stress the unity of the Church. The Vernacularists say that the vernacular will proclaim the catholicity of the Church — and that “caritas” is the Scriptural proclamation of unity! Clever boys there,” he writes to Msgr. Carton. “When 2,000 bishops sit and listen for three hours — it was a great week for the Poor Souls.”

In another he talks about how the Catholic Church in America is “way up front in the march” with regards to liturgy.

“I get the impression that many of the things we have been doing in America as long as I can remember will be considered great gains in some European countries,” Bishop Franz writes. “Pope John knew what he was talking about when he said the Council would bring the universal Church up to date.”

In addition to excerpts from the letters, the museum exhibit includes the vestments Bishop Franz wore to the council sessions.

“There’s also a display on Archbishop Sheen, another Peorian who was at the council. Msgr. Doug Hennessy and Archbishop (John J.) Myers were seminarians in Rome at that time,” Msgr. Deptula said. “They give some great insights.

“A LITTLE FRESH AIR”
The highlight of the exhibit for Msgr. Deptula, Sister Lea and Sister Ann comes at the entrance to the exhibit.

“We wanted to create the feel that you’re walking into the Vatican, so we have a big poster of the window of the Holy Spirit and a re-creation of an altar with the Book of the Gospels enshrined,” Msgr. Deptula said. This pays homage to the role Scripture played in the discussions and reflects the theme of one of the major documents to come out of the council, “Dei Verbum.”

One of the “periti” or experts at the Second Vatican Council was Pope Benedict XVI, who worked on the Commission on Missions alongside Archbishop Fulton J. Sheen. Sister Lea and Sister Ann were able to find a photo that shows the two in close proximity.

A quote on the back wall of the exhibit notes Pope John XXIII’s desire for the church’s 21st ecumenical council: “I expect a little fresh air from it.”

That fresh air continues to blow through the church, according to Msgr. Deptula.

“This whole Year of Faith is because of the Second Vatican Council, because Pope Benedict wants us to remember the gift for the church in the modern age that the council was,” he said. “We need that same spirit. We need to bring that same enthusiasm for our faith into the current age.”

“Vatican II and the Diocese of Peoria” will be up through June. The museum is open Monday through Friday, from 9 a.m. to 4 p.m. There is no charge, but all groups receive a special gift from Bishop Daniel R. Jenky, CSC.