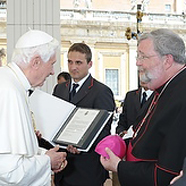 Photo Caption: Bishop Daniel R. Jenky, CSC, presents the “positio” on the life of Archbishop Fulton J. Sheen to Pope Benedict XVI in May of 2011.

Many things are put on hold during a time of transition between popes, but the cause for the beatification and canonization of Venerable Archbishop Fulton J. Sheen isn’t expected to be one of them.

“I have spoken to our leaders in Rome — Dr. Andrea Ambrosi, our postulator, and formally to Msgr. Jason Gray, who works in the Congregation for the Causes of Saints. Even now, to this day, the work of the Roman Curia is continuing,” said Msgr. Stanley Deptula, executive director of the Archbishop Fulton John Sheen Foundation.

He explained that while the cardinals who head the Vatican congregations lose their positions when the pope steps down, the day-to-day activity in the offices doesn’t stop.

“Dr. Ambrosi assures me the whole process of investigating the alleged miracle continues along its normal course,” Msgr. Deptula told The Catholic Post. “Of course, nothing continues as fast as I want it to happen — Roman speed is never quite American speed — but I am assured there is no delay.”

The alleged miracle concerns James Fulton Engstrom of Goodfield, who was without a pulse for 61 minutes after his birth on Sept. 16, 2010. His parents, Travis and Bonnie Engstrom, prayed for Fulton Sheen’s intercession and asked others to do the same.

The child’s heart started beating just as the staff at OSF Saint Francis Medical Center in Peoria was about to declare a time of death. The Engstroms were warned that James might be blind and affected developmentally for the rest of his life, but he is a healthy little boy.

A diocesan tribunal was convened on Sept. 7, 2011, to explore the incident. Their findings were forwarded to the Vatican’s Congregation for the Causes of Saints that December.

The next step would be a review by a group of bishops and cardinals. With their approval, it would be sent to the new pope.

There are two other fully documented miracles that predate James Engstrom’s alleged healing, but foundation officials chose to move forward with his case because it was relatively clear-cut, according to Msgr. Deptula.

While it’s true that Venerable Archbishop Sheen’s cause has moved with some speed to this point — and that Pope Benedict XVI personally knew and admired him — Msgr. Deptula said that in the end “this is God’s cause.”

“As we have been reminded over and over the work of the Sheen Foundation is ultimately a spiritual work. Only God makes saints, and God makes saints in his way and in his time,” Msgr. Deptula said. “When, if, God wants Fulton Sheen beatified and canonized, it will most certainly happen.”