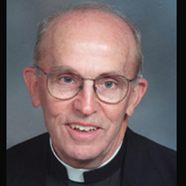 Photo Caption: Msgr. Doug Hennessy, pastor of Holy Trinity Parish in Bloomington, was a seminarian in Rome during Vatican II.

BLOOMINGTON — It was a stroke of “sheer good luck” that put Msgr. Doug Hennessy in St. Peter’s Square in Rome to witness the opening of the Second Vatican Council in 1962.

“I arrived around the first of September in 1960. I was a seminarian for the Diocese of Peoria. They sent me there to study theology. That’s how I happened to be there,” said Msgr. Hennessy, who now serves as pastor of Holy Trinity Parish here.

He was a student at Gregorian University in downtown Rome, where a handful of American bishops stayed during the groundbreaking council. The Bloomington native was ordained to the priesthood on July 14, 1963, at the Basilica of the Twelve Apostles in Rome by Archbishop Ettore Cunial.

“When I left in 1964, I left with the sense that I was trained like everybody who had been ordained before me and like nobody would be ordained after me,” Msgr. Hennessy said.

Another young seminarian for the Diocese of Peoria, John J. Myers — now Archbishop Myers of Newark, N.J. — would come to Rome during Msgr. Hennessy’s last year and remain while the last three sessions of the Second Vatican Council took place.

He would also meet and receive a hug from Archbishop Fulton J. Sheen, a native of El Paso and one of the “periti” or experts invited to work with the Vatican II Commission on Missions.

Present for all four sessions was Bishop John B. Franz of Peoria, who wrote many personal letters to Msgr. George A. Carton, chancellor of the diocese, about what was taking place. Some of them are included in “Vatican II and the Peoria Diocese,” an exhibit in the Diocesan Museum at the Spalding Pastoral Center that will run through June. (See the accompanying story.)

LIVELY SESSIONS
Msgr. Hennessy’s recollections are included in the exhibit by way of a short video that can be played on a tablet computer. He has also loaned photos and newspaper articles from his own collection to the museum.

He told The Post that when the council was convened, he had no idea what it meant.

“All I knew was that there was the Council of Trent in the 16th century and there was a council in the 19th century,” he said with a laugh. “I had no idea what would be on the agenda.”

Msgr. Hennessy said a Roman Synod had preceded the opening of the Second Vatican Council that was “pretty inconsequential.”

“I think many thought the council would be a similar kind of event — the bishops would come and say ‘yes’ to a lot of things that had been prepared and life would go on as it usually was,” he explained. “There was not much sense that it would be the incredible event that it was before it happened.”

Msgr. Hennessy said that once the council started, it became clear that the world’s bishops were taking a very active role in the discussions and even rejecting what had been prepared for them.

During the first session, the seminarians were allowed to attend the press briefings for the English-speaking journalists and Msgr. Hennessy said quite a few of the seminarians took advantage of that opportunity. “I think that’s why they stopped us going the second time around!”

“There would be a bishop or two and a couple of theologians explaining things,” he recalled. “It was just fascinating to hear what they were talking about and to hear them go back and forth, very knowledgeable people talking about what was at stake and what the issues were that they were debating.”

“WE’VE HARDLY BEGUN”
By the time the Second Vatican Council closed on Dec. 8, 1965, major constitutions on the liturgy (“Sacrosanctum Concilium”), divine revelation (“Dei Verbum”), the mystery of the church (“Lumen Gentium”), and the church in the modern world (“Gaudium et Spes”) had been approved. The council fathers also promulgated decrees on a host of subjects, including social communications, the mission activity of the church, the ministry of priests, the apostolate of the laity, and relations with other churches.

All of these are gifts to the church that we’re still unpacking, according to Msgr. Hennessy. He cited the reform of the liturgy as one of them.

“It hasn’t been perfect by any means, but by and large the simplification of rites, letting us worship in our own languages, I think that has been a great gift to the church,” he said.

Understanding the church as the people of God, that our fundamental dignity comes from our baptism, and accepting the universal call to holiness also flowed from the council and continue to bear fruit, Msgr. Hennessy said.

“Vatican II laid out principles. It didn’t have a very detailed program of reform,” he added. “It left the church to work that out and we’re still working it out.”